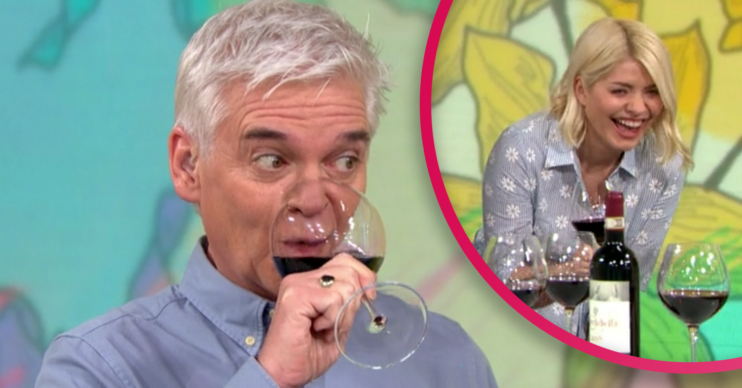 Holly made a bit of a blooper…

The duo and wine expert Helen McGinn were offering their advice on the best Mother’s Day tipples.

However, after the segment aired ITV viewers took to Twitter with a bit of a complaint about the pair – and poor Helen.

Especially after a little booze blooper by Holly…

This Morning hosts Holly and Phil were joined in the studio by Helen, who presented the hosts with assorted red, white, rosé and sparkling wines.

The hosts duly obliged in tasting the wines as Helen talked through taste, prices and where to buy the wines.

Phil was seen swirling the wine around his mouth before swallowing it like a true pro.

Holly, meanwhile, took sips of hers before delivering her verdict.

At one point, towards the end of the tasting segment, Holly did make a slight blooper.

She misheard Helen’s description of a wine, thinking she had called the red “Cabernet Plonk”.

As a result, the studio descended into chaos, with Holly, Phil and Helen doubling up in laughter as they clutched their glasses of wine.

So perhaps it was that incident which led viewers to comment that the hosts were perhaps a little tipsy – or pretending to be!

What did viewers say about Holly and Phil?

One claimed: “They’re all pretending to be drunk.”

A third commented on Helen and said: “Is the wine lady on #ThisMorning already drunk?”

They’re all pretending to be drunk.

“Need to be drunk to watch it to be honest!!!” said one cruel viewer.

Another said Holly was drunk “after a few glasses”, as another commented: “Down the hatch, Holly.”

Phil came under fire for his behaviour during the segment too.

Phillip does, in fact, have his own wine brand, so he might just know a thing or two about the drink.

And, eco fans, it also comes flatpack bottle made from recycled material.

So what did you think? Tell us on our Facebook page EntertainmentDailyFix.