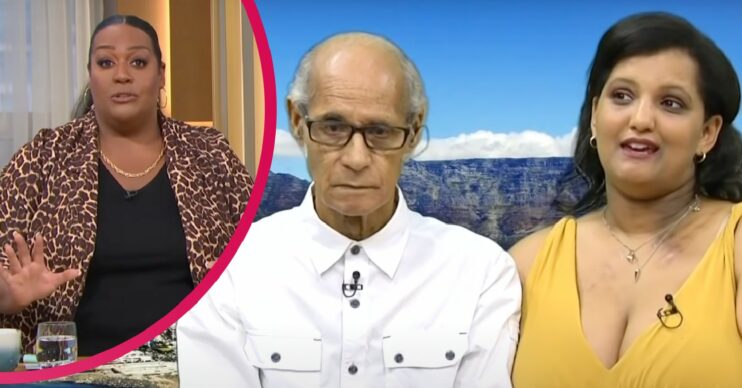 On This Morning today, host Alison Hammond has come under fire from viewers following a “car-crash” interview.

The 47-year-old was slammed by fans for asking an “intrusive” question to a couple who were appearing on the show.

Dermot O’Leary and Alison were back to host today’s show, and it was an eventful one.

During This Morning today, Alison and Dermot met a couple who had a 51-year age gap between them.

The couple, Terzel and Wilson Rasmus phoned in from Cape Town, South Africa, where they live.

Read more: This Morning: Alison Hammond and Dermot O’Leary to host next week

When asked what it was about Wilson that made her fall for him, she said it was his “cool demeanour”.

“He was very confident and he knew what he wanted,” she said. “He was a gentleman as well.”

When Wilson and Terzel met, he told her he was 63!

What happened next on This Morning today?

When asked about how their families had reacted to their relationship, Terzel said her parents had been “happy” for her.

Terzel then said that the only thing that annoys her about Wilson is that he doesn’t know how to use Netflix.

Terzel then revealed that they don’t want to have children, which sparked Alison’s next cheeky question.

“And Terzel, is everything good in the bedroom?” Alison asked, causing Dermot to hang his head.

“Everything is good,” Wilson replied. “Many friends always ask that question and I always say I’m not going to talk about it.”

“But what I can say is, we have no problems,” he said.

“YES! Yes, Wilson!” Alison cheered as Wilson and Terzel laughed. As the call ended, Dermot turned to Alison, saying: “You had to go there, didn’t you?”

“Everyone wants to know,” Alison shrugged.

However, despite everyone involved seeing the funny side of Alison’s question, some viewers didn’t. They took to Twitter to slam the presenter.

“Wtf Alison,” one viewer wrote. “What business is that to any of us?”

“Oh Alison, why ask them about the bedroom?” another asked.

Meanwhile, a couple of viewers branded the interview a “car crash”.

However, one viewer saw the funny side though.

“Alison is such a legend,” they laughed.

This Morning returns Monday, February 14 at 10am on ITV and ITV Hub.