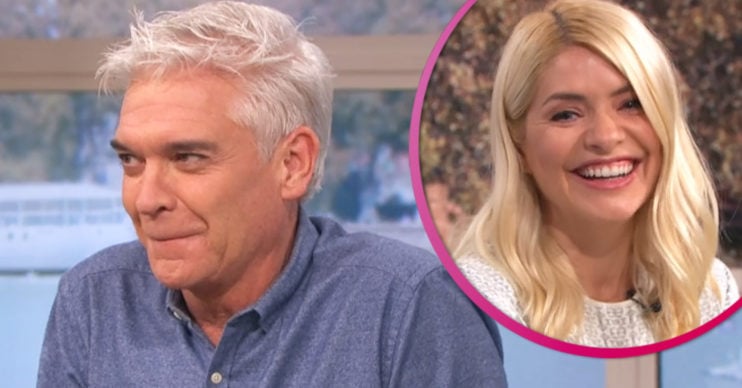 This Morning host Phillip Schofield almost dropped the f-bomb on the show today.

The presenter was discussing a fly infestation in the ITV studio with his co-star Holly Willoughby.

The pair had finished watching a segment by Phil Vickery on gypsy tarts.

However, Holly and Phil were surprised there weren’t any tarts in the studio for them to taste test.

Holly joked: “I think the flies got it, blame the flies.

Read more: This Morning fans heartbroken as tearful mum reveals daughter is bullied for being ginger

“There’s one on cue, I told they were showbiz flies.”

Phil then said: “We are overrun with them at the moment. It’s an infestation of cluster fu… flies.”

Holly burst into hysterics as he said: “Nearly.”

Alongside a clip of the moment, it wrote: “Note to self – don’t say cluster on live TV!

Meanwhile, elsewhere on the show, Phil hit out at a “miserable” Spin to Win caller.

During the segment, one woman answered the phone and said “hello” rather than the pass phrase.

Phil exclaimed: “No! Victoria! That was a miserable hello, wasn’t it?

After another call fail, the third viewer answered with the correct phrase and played for cash.

Read more: This Morning star Phillip Schofield says marriage and family are ‘a work in progress’

Meanwhile, Judith won £750 and an I’m A Celebrity t-shirt and water bottle despite admitting she doesn’t want the popular ITV show.

Holly told her: “You might have some friends who will want this t-shirt.”