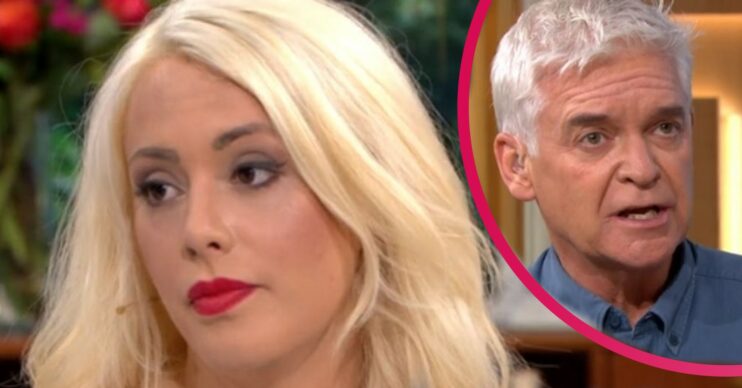 Laura Amherst has made quite a name for herself recently, and divided This Morning viewers when she appeared naked on the daytime show.

Love her or loathe her, she certainly has drummed up awareness of the lengths people will go to in order to protect the planet.

But viewers of This Morning clashed over whether Laura’s naked ambition was the best way to raise awareness of such an important issue.

Who is Laura Amherst?

Blonde bombshell Laura Amherst, 31, describes herself as a politics student and a member XR, the Extinction Revolution.

She is a single mother of one and lives in Essex.

Laura has appeared naked at several climate change protests in the last month and amassed a following of 17,000 on Instagram.

What happened when she appeared on This Morning?

Holly Willoughby passed Laura some cards before the camera came on.

Phil and Holly asked her to explain why she used nudity to draw attention to the environmental crisis facing the planet.

She said: “I protest topless to help save the planet.”

Laura said  she’d rather not be naked but people don’t listen to her so she’s showing even more flesh than usual.

People have said, ‘You’ve got so many rolls on your body I don’t want to have to see that’

Phillip Schofield asked Laura what she thought about Insulate Britain.

They are a different climate protest and brought the M25 to a standstill on multiple occasions in recent weeks.

She said she wished to remain ‘neutral’  before adding they  ‘should be held responsible for their actions’.

But many of those tuning in seemed preoccupied with the fact Amherst didn’t have ‘a stitch on’ for the appearance.

What did social media users say about Laura Amherst?

While some people criticised Laura for coming across badly, others applauded her.

One person said on Twitter: “Let’s be honest love you protesting topless isn’t going to save the world.”

Another wrote: “Topless? Looks like she ain’t got a stitch on. Hopefully they have a towel on that sofa.”

Read more: This Morning: Holly Willoughby called out by viewers after remark about wanting to hug Phillip Schofield

A third said: “You don’t have to be topless to preach about climate change.”

However, one added: “I think this is commendable.”

One tweeted: “Omg well done that topless woman!!! Speaking so well, so calmly and simply asking that you think about the cause and why these actions to draw attention and disrupt are necessary. Amazing, well done.”

Is Laura Amherst on Onlyfans?

Laura has admitted being an Onlyfans model and is believed to have raked in ‘thousands’ of pounds.

She claims she will donate three-quarters to climate campaigning and charities like Greenpeace.

What do you think of Laura’s naked protests? Join the debate on our Facebook page @EntertainmentDailyFix.