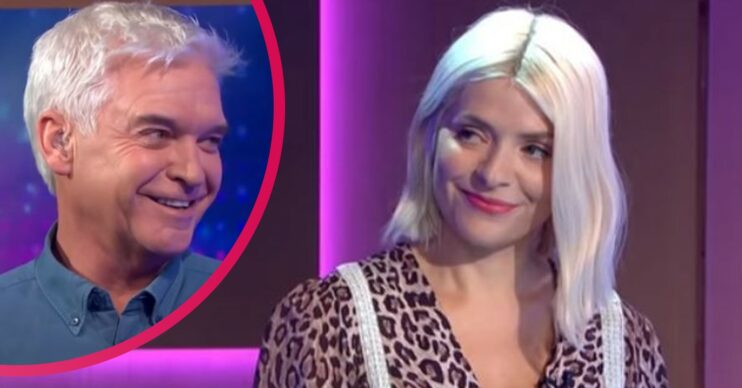 This Morning: Holly Willoughby called out by viewers over remark about wanting to hug Phillip Schofield

Holly and Phil have to socially distance on air

This Morning host Holly Willoughby has been called out by viewers after saying she wanted to hug Phillip Schofield on air.

At the start of today’s programme, Holly took part in a game from Phil’s ITV show The Cube.

In the game, Holly had to roll a ball and get it in between two traps at the top.

Holly failed the first attempt and took on the challenge once again.

However, on the second attempt, Holly won the game.

Holly exclaimed: “Oh my God! I want to hug you so badly.”

However, viewers watching weren’t happy with Holly’s comment about wanting to give Phil a hug.

Many pointed out that the pair have been able to hug off air and most recently at the National Television Awards despite having to socially distance on the TV.

One person said on Twitter: “‘I want to hug you’ you’ve been hugging him for months, be quiet Holly.”

Another wrote: “Holly says ‘I could hug you’… what’s stopping her? She did plenty on the NTA awards night!”

A third added: “Why do Phil and Holly pretend they cannot hug when they were hugging and kissing at the NTA awards?”

Meanwhile, Holly and Phil have had to socially distance on the programme since March last year.

But away from the This Morning set, Holly and Phil have been able to share a hug thanks to restrictions lifting.

Earlier this month, Holly shared a group selfie with the This Morning team as they all squeezed into a lift.

It came after This Morning won Best Daytime Show at the awards ceremony.

Alongside the snap, Holly said: “The obligatory lift selfie… Waking up with a full heart this morning… thank you once again…

“We love making this show and to pick up this award means so much to the whole team… congratulations to everyone at @thismorning… huge love.”