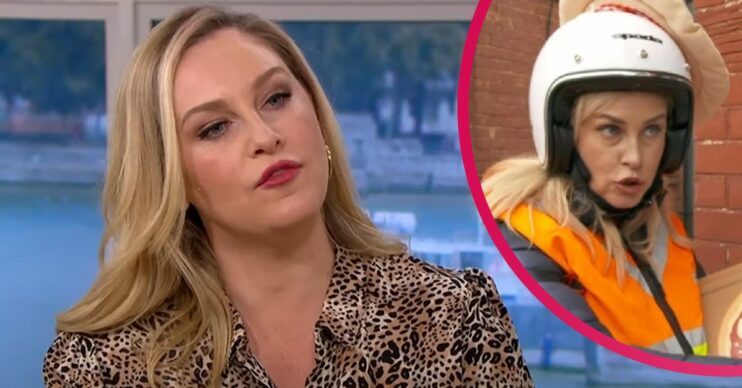 This Morning: Josie Gibson returns for competition segment but fans want her hosting

She recently completed a hosting stint

Josie, 36, filled in for Holly Willoughby on Tuesday, Wednesday and Thursday after the presenter became ill with a tummy bug.

And viewers absolutely loved Josie as host, with many people wanting more of her.

But today Alison Hammond and Dermot O’Leary returned to host Friday’s edition while Josie was back to present Dosh On Your Doorstep.

What did Josie do on This Morning today?

Josie hosts the money competition on a Friday as she travels to a viewer’s home for a chance for them to win some cash.

Today, Josie met another viewer who bagged £1,000 in the segment.

However, viewers weren’t happy as they wanted Josie back in the hosting seat rather than presenting competition segments.

One person said on Twitter: “Josie back on competition duties. Please come back to presenting Josie, it suits you better.”

Another wrote: “Oh Josie you’re so much better than this [bleep] they put you through…”

A third added: “See they’re back to mugging Josie off. She’s so much better than that.”

A fourth commented: “Just saying… if I was producing #ThisMorning I’d take Josie off the doorstep and give her a permanent seat on the #ThisMorning sofa!

“She was so brilliant this week!”

Josie was brought in last minute to replace Holly on Tuesday.

Phillip Schofield explained that Holly had a “tummy bug” and therefore couldn’t work.

Josie admitted it felt “surreal” being alongside Phil actually hosting the programme.

On Thursday, after her presenting stint, Josie paid tribute to Phil on Instagram.

What did Josie say?

She said: “What a surreal week it’s been!!!! Three days of presenting one of biggest daytime TV shows of all time @thismorning.

“I’ve got to give it up for this hero @Schofe you have been my rock this week.

“Not only have you presented the show but you’ve had to teach me along the way.”

She then apologised for “all the slip ups”, adding: “You have made me laugh so much especially in the make up room.

Many of her celebrity friends congraulated her.

Read more: Phillip Schofield and Josie Gibson open-mouthed as man with the world’s biggest penis shows them a picture!

This Morning chef Juliet Sear added: “Amazing well done Josie!!! It was fab to be on with you this week!!”

What did you think of Josie on This Morning? Leave us a comment on our Facebook page @EntertainmentDailyFix and let us know what you think.