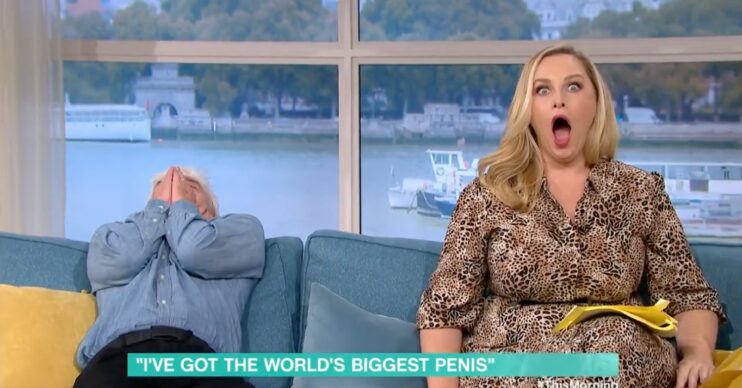 Phillip Schofield and Josie Gibson open-mouthed as man with world’s biggest penis shows them a picture!

And he revealed his balls match...

This Morning hosts Phillip Schofield and Josie Gibson were left open-mouthed as the man with the world’s biggest penis showed them a picture of it on the show!

The man with the world’s biggest penis was a guest on today’s show (Thursday, November 18). During the interview, actor Jonah Falcon, who is the owner of the world’s largest penis, showed the hosts a picture of it.

You can imagine their reactions!

How did the This Morning hosts react?

During the interview, Jonah said that his penis was 13.5 inches long. In an attempt to explain to viewers the scale of Jonah’s member, the This Morning hosts brought out a couple of items to represent the size. The items included an aubergine and a cardboard tube.

In an attempt to give the presenters a better idea of its size, Jonah decided to show them a picture of it on his phone.

Read more: Opinion: Holly Willoughby’s This Morning absence is the best thing that could ever happen to Josie Gibson

“Hellfire!” Phillip said, before collapsing back onto the sofa in shock.

Josie could only stare at the camera in wide-eyed, and wide-mouthed, shock.

“Oh my goodness,” was all she could get out.

“Congratulations,” Phillip said once he’d managed to get his composure back.

What else did Jonah have to say?

Luckily for the audience, the picture of Jonah’s penis was only shared with the This Morning hosts, sparing viewers from a mid-morning shock.

Jonah also revealed some of the issues having a penis of that size had had on him during his day-to-day life. He told This Morning viewers how security at an airport had asked him if he had a tumour during a routine search.

This Morning viewers found the segment of the show hilarious and were loving Phillip Schofield and Josie Gibson’s reactions.

“I’m sat here in tears absolutely howling!” one viewer wrote. “I can’t help it… I blame Phillip and Josie. Proper made my day!”

“Hahahaha!! How many thousands of people are trying to find that pic?” another viewer wrote.

“Poor Josie, talk about a baptism of fire and she is doing brilliantly!!! Phil’s face tho,” a third This Morning fan wrote.

This is Josie’s third day as temporary host of This Morning due to Holly Willoughby still being ill. Holly sent Josie a message on her Instagram story yesterday (Wednesday, November 17) thanking the 36-year-old for ‘saving the day’.

What do you think of Phillip and Josie’s reactions? Leave us a comment on our Facebook page @EntertainmentDailyFix and let us know what you think.