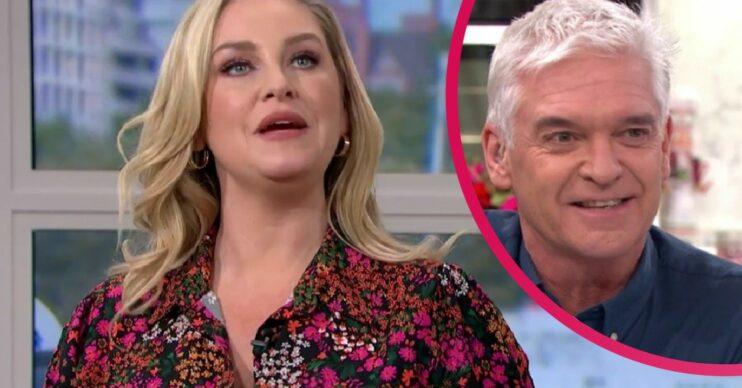 Josie filled in for Holly Willoughby

This Morning star Josie Gibson has paid a heartfelt tribute to Phillip Schofield as she apologised for ‘all the mistakes’ she’s made during her three days co-hosting the show.

Josie, 36, has been hosting This Morning alongside Phillip for the past three days while Holly Willoughby has been away. Holly is still recovering from a tummy bug.

Today (Thursday, November 18), Josie posted a picture on her Instagram paying tribute to Phillip. She also used the post to apologise for all her ‘ slip-ups’.

The post in question is a sweet picture of Phillip, 59, and Josie Gibson standing in front of the This Morning sofas, smiling.

Josie captioned the post with: “What a surreal week it’s been!!!! Three days of presenting one of the biggest daytime TV shows of all time [This Morning].”

Josie Gibson goes on to write: “I’ve got to give it up for this hero [Phillip] you have been my rock this week. Not only have you presented the show but you’ve had to teach me along the way. Sorry for all the slip-ups, you and [Holly Willoughby] and all the other presenters make it look effortlessly easy.

Read more: Phillip Schofield and Josie Gibson open-mouthed as man with the world’s biggest penis shows them a picture!

Josie Gibson finished the post with an adorable: “Love you Schofe, what a legend!”

Fans and celebrities alike flooded the comments with messages of support for Josie.

“YOU HAVE BEEN AMAZING,” one wrote.

“You have been a breath of fresh air,” another said.

“You’ve been brilliant Josie. So many lol moments this week. Well done!!!” a third fan declared.

What did Josie Gibson say about presenting This Morning?

Josie Gibson stepped in for Holly Willoughby on Tuesday at the last minute. Introducing Josie, Phillip said that she had been “parachuted in”.

Josie went on to say how exciting and surreal it was to be presenting the programme she’d “grown up watching”.

“Look, I’ve been thrown into the deep end, but I’ve got the best armbands on the planet,” she said, referring to her co-host.

Fans have been so enamoured with Josie Gibson on the This Morning sofa that they have called for her to take over on Fridays.

What have you made of Josie Gibson on This Morning? Leave us a comment on our Facebook page @EntertainmentDailyFix and let us know what you think.