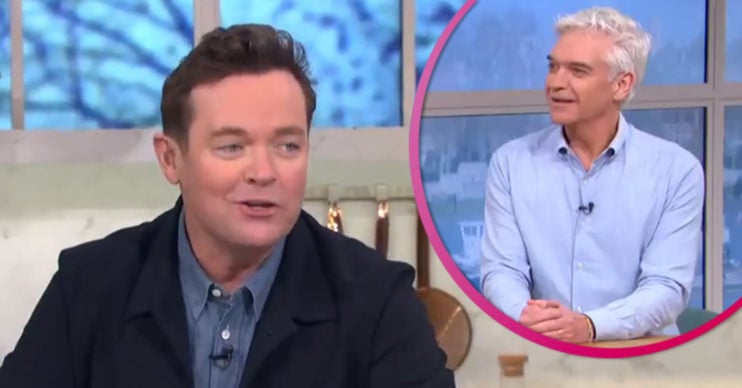 Stephen Mulhern gatecrashed ITV show This Morning today as he gave the hosts an award.

Earlier this week, viewers had been confused over Holly Willoughby and Phillip Schofield‘s behaviour during James Martin’s cooking segment.

Some people predicted that Ant and Dec were behind the antics for their Saturday Night Takeaway segment, Get Out Of Me Ear!.

And now, others think Stephen has confirmed the prank.

On Thursday’s programme, Stephen burst into the studio and said: “Stop! Stop what you’re doing! Let me tell you, I bring good news.

“This Morning, you are the winners of On Air Dares!” as he showed a mini trophy.

Holly admitted, “I was expecting something a bit bigger,” to which Stephen said: “That is to go next to the BAFTA.”

What did Stephen say?

He added: “Listen everybody at home, I know what you’re thinking, this is madness. All will be revealed this Saturday on Saturday Night Takeaway.”

“How you feeling about it?” he asked the hosts.

Many were baffled by Stephen’s appearance as one said: “Omg @StephenMulhern on @thismorning.”

Omg @StephenMulhern on @thismorning 🤣🤣🤣🤣 love that. Can’t wait till Saturday to find out what the heck is going on. #ThisMorning

#ThisMorning what is going on pic.twitter.com/dA4Jqz9CyN

“Can’t wait till Saturday to find out what the heck is going on.”

Another wrote: “What is going on?”

However, others claimed they knew it was a prank.

One person said: “We all knew it was a prank Stephen.”

We all knew it was a prank Stephen 🙄 #ThisMorning

#thismorning is involved with Saturday Night Takeaway? I’m truly shocked even though we all figured it out on Monday pic.twitter.com/gc1NHMTlTS

Another wrote: “#thismorning is involved with Saturday Night Takeaway?

A third tweeted: “Ah so all the weird stuff happening on @itv daytime was down to @antanddec.

It comes after viewers criticised Holly and Phil for their behaviour during James’ cooking segment.

It saw Phil get a cramp in his arm and Holly make a dig at the appearance of James’ dessert.

She said: “I’m not being rude but it does taste better than it looks.”

One viewer wrote on Twitter: “Ant & Dec were definitely in their ears.”

However, this week’s Lorraine also caused some confusion.

Lorraine Kelly confused fans when she burped, yawned and complained about a fly during an interview with KSI.

The following day, she addressed her antics on air.

She said: “There was a great deal of concern for my wellbeing yesterday after that rather giddy interview with KSI.

“Don’t worry, all’s going to be revealed later on in the week. That’s all I’m going to say.”