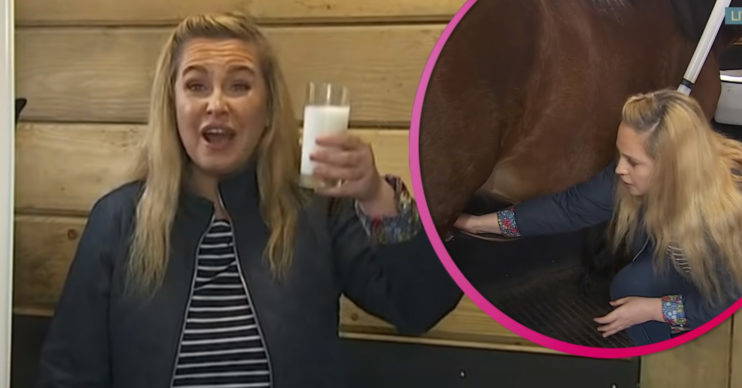 During the programme on March 16, Josie Gibson shocked viewers as she milked a horse live on air before drinking the milk.

Giving her verdict, she said at the time: “It’s a bit like a sweet coconut milk but it hasn’t got a smell to it.”

ITV viewers complain to Ofcom about This Morning

However, some viewers weren’t impressed with the segment and voiced their disgust on Twitter.

Read more: This Morning: Josie Gibson disgusts viewers as she milks a horse live on air

According to the Manchester Evening News, Ofcom received objections over the scenes.

The majority of the 115 complaints on March 16 related to Josie’s segment.

It comes after some viewers expressed their disgust over the scenes.

One person said on Twitter: “Just switched on the telly to hear Josie Gibson talking about drinking horse milk…” followed by a sick face emoji.

Another added: “Josie milking a horse!! Well… whatever next!”

A third tweeted: “That is just wrong!”

Meanwhile, one tweeted Josie: “@Josiestweet you were brave with the horse.”

What else happened in the segment?

In the segment, Josie appeared from Cromwell Farm in Bath where they milk and produce mare milk.

Frank added: “It’s similar to ladies’ breast milk. When you look at the makeup of it, it’s very similar.

“I had a stroke last year and they couldn’t understand why my cholesterol went down in a matter of a day.”