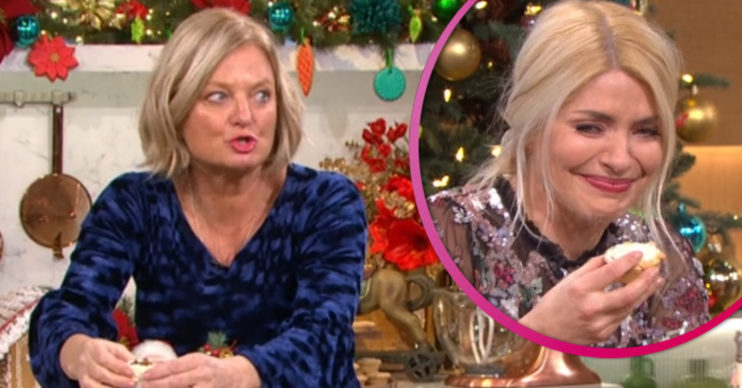 This Morning: Holly Willoughby told off by Alice Beer for manners during mince pie segment

Holly struggled to compose herself

This Morning host Holly Willoughby was told off by Alice Beer for her manners on the show today.

However, Holly already had the giggles before Alice began revealing her top picks.

As Holly chuckled, Phillip Schofield said: “You explain it, I’m not going to say anything, you’re the one that’s laughing.”

Holly replied: “No, I’m not laughing. I’m fine… I can’t,” as she burst into giggles again.

In addition, Phil added that something “very rude” had been said.

What did Alice say to Holly on This Morning?

Alice told her: “You were being rude about my food weren’t you?”

I like a big, full, filling in my mince pie!

However, Alice interrupted: “No, don’t say it!”

After that, Alice then got on with the segment and revealed the different mince pies she had.

At one point, Holly struggled to compose herself as Alice said: “Phillip, this is just for you. Ignore her.”

As Holly tucked into a mince pie, she said: “How much more?”

Alice said: “Come on, stick them in. I ate six last night. There was no spitting it out for me,” as Holly giggled.

In another moment, Alice admitted: “I like a big, full, filling in my mince pie!” leaving Holly and Phil laughed.

Alice shouted: “Holly, eat it! Where are your table manners? Honestly. She’s got no manners that girl! Eat what’s on your plate.”

But what did This Morning viewers say?

In conclusion, Alice then joked: “You’re not getting down until you’re finished!”

However, some viewers weren’t impressed with Alice’s antics.

One wrote: “Alice shouting at Holly like she’s her daughter.”

In addition, another said: “Literally just had to turn off This Morning because that Alice woman is SHOUTING and giving off stressful vibes.

“Feel like I need to go and lie in a dark room now.”

Head to our Facebook page @EntertainmentDailyFix and tell us what you think of the segment.