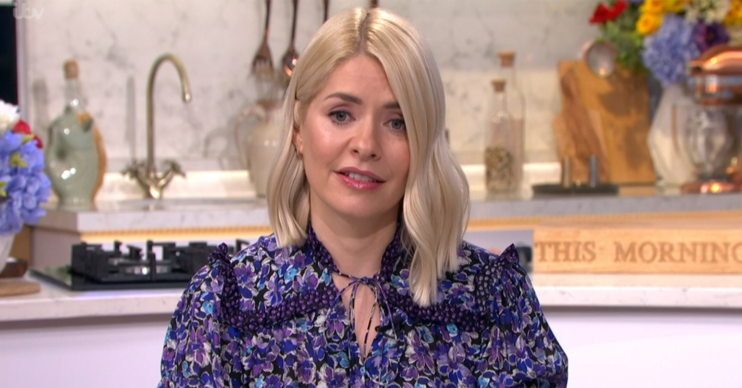 Holly revealed her struggles with homeschooling

This Morning host Holly Willoughby has revealed her fear for her three children during lockdown.

The presenter, 39, explained her struggles during today’s phone-in segment about homeschooling.

Holly and co-star Phillip Schofield were joined by Head Teacher Christine Cunniffe to give advice to viewers on today’s show.

But at the end of the segment, Holly admitted she was struggling with similar issues to the callers and asked Christine for advice.

She said: “Can I ask a question on behalf of a working mum and parent of three, struggling?

“My big fear is we’ve worked really hard not to put our kids in front of screens and the screen time, I toss it up.

“And here I am, with three children, spending online learning in front of a screen and then when they finish they want to talk to their friends.

“I’m suddenly like, ‘Am I just throwing this all out of the window?'”

Christine said: “There’s only so much you can do and that’s what the children want.

“They have to have social engagement with friends but it’s just talking about the amount of time and trying to do other things.”

The star offered advice on This Morning

She added: “It’s just about balancing it and getting the right time. It’s hard for everyone and it’s about talking and encouraging each other.”

Phil then raised his hand and jokingly asked: “Miss, can I go to the toilet please?”

Christine replied: “No! You should have gone in the break.”

The star has her three children with her husband Dan Baldwin.

Meanwhile, earlier this month, Holly was praised for giving a struggling mum her old printer to help with homeschooling.

Read more: Holly Willoughby delights fans with a double selfie of her dress

Caller June explained she didn’t have the proper resources to homeschool her kids.

June said: “Yesterday, I ended up writing out all of my twins’ work because my printer is not doing what it should be doing.”

Holly told her: “I’ve got a spare printer at home, I’m going to bring it in tomorrow.

“Give us your address, I have a spare printer. Mine broke, I ordered a new one and the other one kicked back into life.”