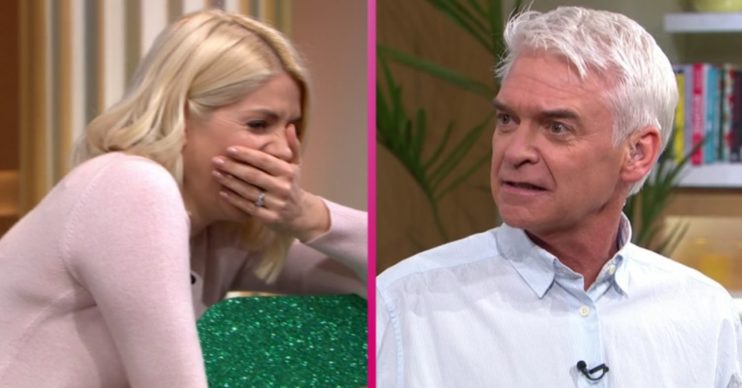 This Morning: Holly Willoughby and Phillip Schofield stunned as Spin to Win caller hangs up

"Call me back in two minutes!"

This Morning hosts Holly Willoughby and Phillip Schofield were left stunned during the show’s Spin to Win segment today (May 19).

On Wednesday’s episode of the ITV programme, the pair spoke to viewer Joe to play the competition.

But despite giving the correct passphrase, Joe later hung up the phone.

What happened to Holly Willoughby and Phillip Schofield?

After giving his name and location, Joe said: “Can you call me back in two minutes please?”

The viewer then hung up the phone, leaving Holly and Phillip gobsmacked.

The line went dead as Holly laughed: “Is he joking?”

“What are we supposed to do for two minutes? Joe, it’s network ITV waiting for you!”

After Holly suggested the viewer may have been on the toilet, Phil fired back: “Well, you can still play the game.”

The pair gave Joe a second chance after cutting to the competition.

However, Phil explained the failed call had caused some technical issues in the studio.

What the hell was that about?!

As Joe answered phone, the presenter ranted: “What the hell was that about?!”

Joe then apologised and explained that he was dealing with his wife, who suffers from motor neurone disease.

Phillip backtracked: “Then that is the best excuse in the world. Is she ok now?”

Meanwhile, the moment didn’t go unnoticed with viewers at home.

Taking to Twitter, one wrote: “Just when you thought you’d seen every which way Spin to Win could go wrong. Joe knows his priorities.”

A second shared: “Watching Spin to Win makes my morning when working from home. Bless Joe, glad he made his priorities clear and made sure his wife was okay but gutted he didn’t win the jackpot!”

Spin to Win is so chaotic, I would watch it if it was a show on its own #ThisMorning

Joe getting through to Spin to Win: “Yabba Dabba Doo! Can you call me back in 2 minutes please?” (hangs up) 😂 #ThisMorning

In addition, a third added: “Joe is an absolute hero – my heart went out to him.”

Another tweeted: “Spin to Win is so chaotic, I would watch it if it was a show on its own #ThisMorning.”

Furthermore, a fifth said: “Joe getting through to Spin to Win, ‘Yabba Dabba Doo! Can you call me back in 2 minutes please?’ (hangs up).”