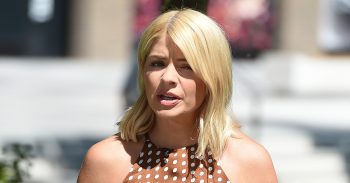 This Morning viewers have slammed Holly Willoughby for appearing to giggle at a photo showing Jennifer Lopez’s fiance with a black eye.

Holly and co-host Phillip Schofield were talking about new claims by retired baseball player Jose Canseco that J-Lo’s man, Alex Rodriguez, had cheated on her with his ex-wife Jessica Canseco.

J-Lo, meanwhile, was reportedly returning to America from a break in the Bahamas with her fiancé when he was spotted with a black eye.

This Morning showed a photograph of Alex, and Holly then appeared to suggest that J-Lo might have caused the bruise, in light of the cheating claims.

Holly then remarked that the injury looked “diamond shaped”.

That got Holly, Phil and their US correspondent giggling, but some viewers have reacted angrily to the misplaced ‘joke’ on Twitter.

One wrote: “Laughing about alleged domestic abuse because it’s a male.”

Another replied, “Exactly what I just thought!” and a third fumed, “I was genuinely shocked they were all giggling and insinuating what happened to him. Not funny”.

Someone else asked: “Would holly of laughed if jlo had the black eye???”

Last year Alex Skeel, who survived years of terrible abuse at the hands of his then-girlfriend Jordan Worth, appeared on This Morning and had Phil and Holly visibly shaken with his story.

It follows a tough week for Holly, who missed co-hosting This Morning on Tuesday to attend her nan’s funeral.

She posted about the loss on Instagram, telling her 5.3 million followers: “Today we say goodbye for a little while to my beautiful Nan… go and be with Grandad… he’s been waiting for you… love you… miss you…”

What did you make of Holly’s ‘joke’ on This Morning? Leave us a comment on our Facebook page @EntertainmentDailyFix and let us know what you think of this story.