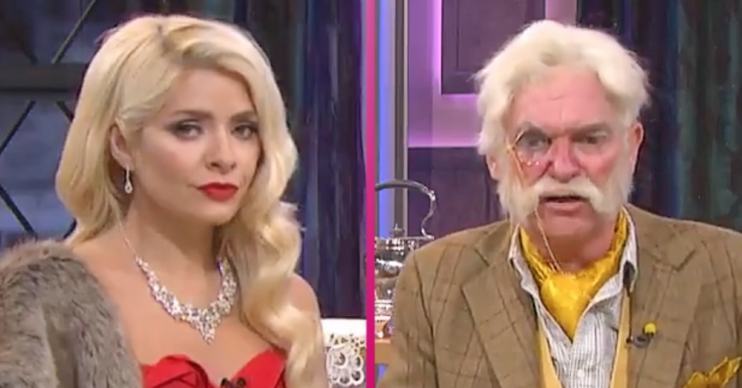 This Morning Halloween special branded a ‘car crash’ – viewers can’t take their eyes off it!

This Morning unveiled its Halloween special this morning (Thursday, October 28) and some viewers branded it a “car crash”.

For its Halloween special, This Morning turned into Cluedo, with ‘The Lady Of The Mansion’ killed and all the guests having to guess who committed the murder.

Holly dressed in a vampish little red dress with a fur scarf, holding a Martini. Her character was an eccentric socialite.

Phil, meanwhile, dressed as an elderly gentleman in a Tweed suit, waistcoat and monocle.

Read more: This Morning: Alison and Dermot ‘could be Holly and Phil’s potential successors’

Furthermore, they both put on comedy accents and exercised their acting chops.

So who killed The Lady Of The Mansion?

Viewers weren’t sure… and were certainly unsure of what was going on.

What in the cringe is this! #ThisMorning

#ThisMorning God this is painful pic.twitter.com/1nMOZD3Wlc

How did viewers react to the Halloween special?

It didn’t take long for viewers to begin cringing on Twitter.

One said: “This is car crash television, ladies and gentlemen. You want to switch off, but at the same time, you just can’t!”

Another asked: “Just put This Morning on. What the [bleep’s] going on?”

A third exclaimed: “What the cringe is this!”

Another wrote: “omg please tell me these aren’t keeping this up all morning.”

Finally, one viewer sighed: “God this is painful.”

It wasn’t all bad

Despite many branding the show cringe, there were some who were loving it.

One Twitter user said: “Unashamed to admit I’m very excited for this episode of #ThisMorning.”

Another admitted: “I’m loving today’s show, @hollywills Looks amazing in her outfit, I think the show is hilarious.”

They said: “#ThisMorning Holly you look so beautiful in the red dress how long did it take to get ready for the show today?”