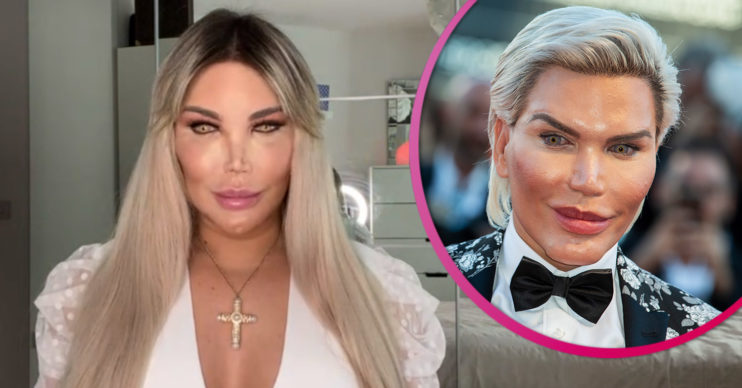 She's recently come out as a transgender woman

Viewers of This Morning were left divided as Jessica Alves, previously Rodrigo, showed off her new look on the show.

Jessica, who has come out as a transgender woman, appeared on Monday’s show to discuss her recent breast surgery and a £30k bottom lift.

The reality TV star, who was previously known as being the Human Ken Doll, said she’s happy with finally being a woman.

What did Jessica say?

Jessica explained: “Over the years, I’ve been developing as a person and a human being.

“Obviously this is not the final result of my development but I was born a woman, I was born a transgender woman.

“Throughout the years, I was fighting against the fact that I have always been a woman inside myself.”

She continued: “I have always known that I was a woman since the age of three, five, six.

“I started cross-dressing at home in secret but that was what made me feel really me.

Over the years, I’ve been developing as a person and a human being.

“Throughout the years, I was playing a character and I was trying to be a man.

“I had a fake six-pack, fake arms, I tried my best to be a man because after all, I was born inside of a male. But I failed badly.”

Jessica has been taking female hormones and has had several procedures and new hair extensions to complete her look.

She’s also had her six-pack removed and has had facial feminisation surgery at a cost of £25,000.

Jessica has had breast enlargement surgery, “lower body feminsation procedures” and has had her Adam’s apple removed.

When asked if she’s done having surgery, Jessica said: “I still need two or three more surgeries to complete my transition.

“Then I swear to God, I’m going to be done with plastic surgery. There’s only so much that one can take.”

Meanwhile, Jessica said her dream for 2021 is to find a nice man, settle down, and become a mother.

Viewers were divided over Jessica’s look, with many worrying about her health.

One person said on Twitter: “Jessica Alves seems to have severe body dysmorphia. Sad to see, not sure they should keep promoting her on this show.”

Jessica Alves seems to have severe body dysmorphia. Sad to see, not sure they should keep promoting her on this show #ThisMorning

Another wrote: “This person has ruined their outlook completely, he looked better before all this plastic surgery!”

A third added: “I’m all up for her becoming a woman but having all the surgery on your face is not a good look.”

I’m all up for her becoming a woman but having all the surgery on your face is not a good look. #ThisMorning

One said: “Jessica Alves looks amazing, but I really do hope she is finished with plastic surgery.”