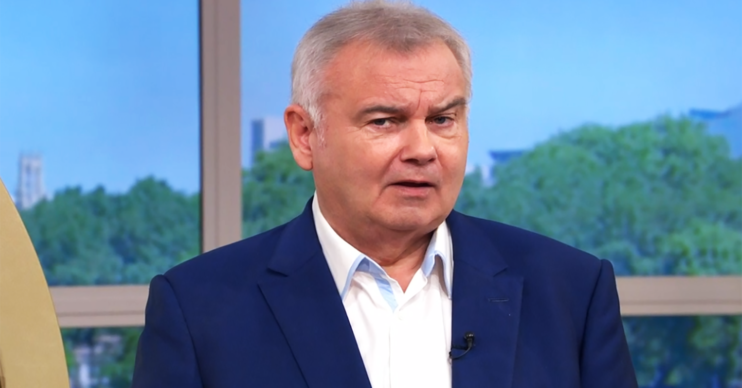 Eamonn made the comment during the Spin To Win segment

Viewers of This Morning were left stunned when Eamonn Holmes asked a caller to “send a picture” after she got out the shower.

Caller Kelly was today’s Spin To Win player after answering the correct pass phrase during the segment.

Kelly explained she had quickly got out of the shower to answer her phone.

The caller then had the chance to win herself a bag of goodies if she answered a question correctly.

Look you can go and dry yourself off now.

The question was which TV duo were appearing on the show later.

However, Kelly had missed the start of the programme because she was in the shower.

She said: “You’ll have to help me because I haven’t been watching the show.”

After some clues, Kelly correctly answered Richard Madeley and Judy Finnigan were coming onto the show.

Ruth told her: “Look you can go and dry yourself off now.”

Eamonn then joked: “Send us a picture.”

One person said on Twitter: “Did Eamonn Holmes just ask a woman on the phone to send a picture when she said she was just out the shower?”

A third tweeted: “Did anyone else hear Eamonn ask her to send a photo, or was I hearing things?”

Did anyone else hear Eamonn ask her to send a photo, or was i hearing things? #ThisMorning

Meanwhile, Eamonn and Ruth are hosting the show over the summer while Holly Willoughby and Phillip Schofield take some time off.

However, viewers were divided over the husband and wife duo hosting.

One person wrote on Twitter: “Yay!! Eamonn and Ruth!! Proper presenters on this show at last.”

But one tweeted: “I will be switching off then for the summer period… two awful presenters.”

Another wrote: “Name a bigger disappointment than putting #ThisMorning on and finding Ruth and Eamonn presenting.”

Do you take part in This Morning’s Spin To Win? Leave us a comment on our Facebook page @EntertainmentDailyFix and let us know.