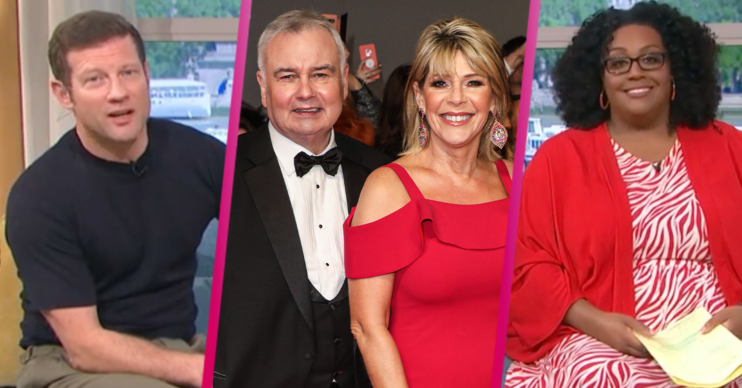 Alison and Dermot came under fire from armchair critics today

This Morning fans have pleaded with ITV to bring back Eamonn Holmes and Ruth Langsford.

The couple were axed as hosts of the Friday show at the start of the year, being replaced by Alison Hammond and Dermot O’Leary.

They also stood in for Holly Willoughby and Phillip Schofield over the summer.

And now some have issued quite the ultimatum to ITV – bring them back or we’re switching off.

Friday’s This Morning is always a laugh a minute with Alison and Dermot at the helm, but some viewers seem to want the show to take on a more serious tone.

“Bring back Eamonn and Ruth! I thought I’d give This Morning another go after the brilliant summer but it’s just as bad if not worse!” they added.

Read more: OPINION: Eamonn and Ruth deserve to be the main presenters of This Morning

Another commented: “Today’s #thismorning has been the worst episode I’ve ever seen! Bring back Eamonn and Ruth!”

“We need them back,” said a third.

“Well, I’ll say it again. Having watched some of Friday’s This Morning, I need to say……… Bring back Eamonn and Ruth! Pleeeeaaaasssee!” said another.

“I’ve never watched and never will as long as those two are presenting,” said another about Alison and Dermot.

“Exactly. We need Eamonn and Ruth back,” another agreed.

However, not everyone feels the same and some took to Twitter to admit they “love” Fridays with Alison and Dermot.

One said: “I like Alison hosting, she makes me laugh. Her and Dermot seem more comfortable together now.”

Another added: “I love Dermot and Alison presenting together so much.”