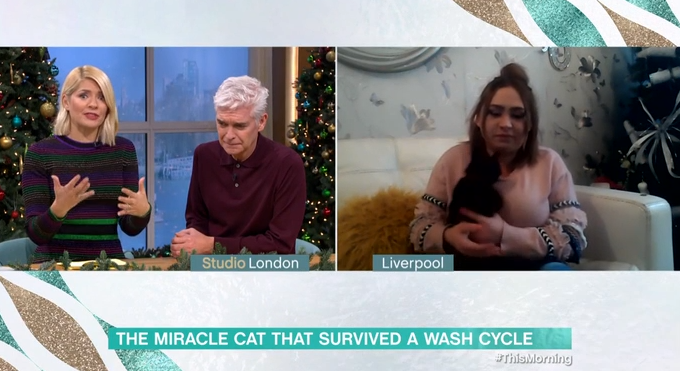 The cat's owner performed CPR to save its life

Viewers of This Morning were left gobsmacked when a guest revealed she performed CPR on her cat after it endured a 20-minute washing machine cycle.

Courtney Drury, from Liverpool, appeared on Tuesday’s show and told hosts Holly Willoughby and Phillip Schofield that her kitten Popsey had climbed into her washing machine for a nap.

But Courney didn’t realise and switched the machine on for a 30-degree wash for 20 minutes.

Poor Popsey endured the entire spin cycle before a horrified Courtney got her out after searching the house for her.

Courtney explained: “I just put the wash on without realising she’d just jumped in for a little sleep. I closed it and put the washer on.

“About 20 minutes later [I realised she was in there] after the wash had finished.”

Phil asked: “So she went through the spin cycle as well?” to which Courtney said: “Yeah.”

Courtney only realised Popsey was inside the washing machine when she “saw her green eyes”.

After opening the door and taking Popsey out, Courtney admitted she thought her kitten had died.

Phil asked: “How do you know how to give a cat CPR?”

Courtney replied: “Well, I don’t. I just thought it works on humans so maybe it might work on the cat. I just started blowing into her nose and mouth.

I just put the wash on without realising she’d just jumped in for a little sleep.

“Her ears then started flickering.”

Revealing what the vets said to her when she took Popsey there, Courtney revealed: “They said they’ve never seen anything like it.

Courtney now has a sign on her washing machine which reads: “Check for cat before switching on!!!”

Viewers were shocked by the story and shared their thoughts on Twitter.

One person said: “Wow I’m sorry but if you can’t find your cat after 20mins then realise it’s in the washer you don’t deserve one! Makes my blood boil stupid [bleep].”

Another wrote: “That poor cat #thismorning.”

A third added: “Why the actual fuck would you go on TV and admit you put your cat in the washing machine for half an hour? Horrible [bleep], take that cat away from her.”

What did you think of Courtney’s story? Leave us a comment on our Facebook page @EntertainmentDailyFix and let us know.