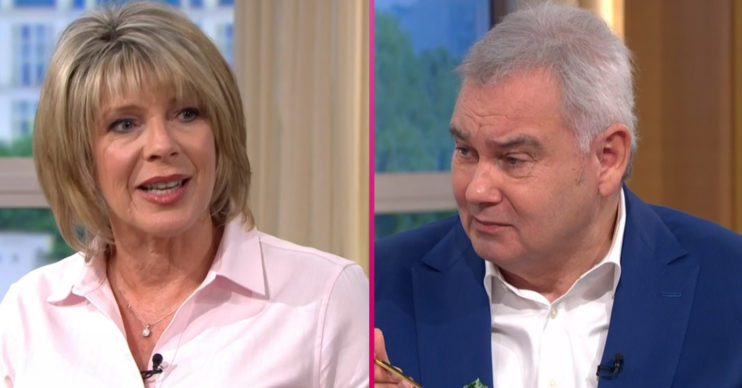 The couple bickered on Monday's programme

This Morning viewers were left divided as Ruth Langsford and Eamonn Holmes bickered on air.

The pair had just watched James Martin cook fish cakes from his home.

However, Ruth and Eamonn started arguing over their own cooking antics this weekend.

As the pair tucked into the dish back in the studio, Ruth said: “You never leave anything on your plate at the end.”

Eamonn replied: “Yes because I was so tired yesterday cleaning that kitchen,” as the crew started giggling.

Ruth told viewers: “As you can tell by the hilarity in the studio, that’s an utter lie.”

However, Eamonn hit back: “Not a lie, how can you do that?” to which Ruth said: “You put some things in the dishwasher.”

Eamonn said: “Who cleaned up after breakfast?”

Ruth replied: “Well you put some things in the dishwasher. You didn’t clean the hob.”

Eamonn cut in: “There was a massive amount of things, it took me half an hour.”

Ruth hit back: “That’s because I made a massive breakfast for everybody!”

After that, Eamonn added: “I noticed you didn’t help me and did I get a word of thanks?”

His wife said: “Why would I thank you? You emptied the dishwasher, yeah I do that three times a day.”

Eamonn corrected her, saying: “No I filled the dishwasher and emptied it.”

Ruth mocked: “Oh wow,” as she and the studio clapped their hands.

Meanwhile, later in the show, Eamonn read out a comment from a viewer who could relate to Ruth.

He said: “This is from Anne Edwards… ‘Eamonn reminds me of my husband, if he’s hoovered or done something he expects a thank you.’

“‘Nobody thanked me,’ says Anne. ‘All the jobs I did pre his retirement. I did nearly everything.'”

However, Eamonn turned to Ruth and said: “That’s not like you don’t do nearly everything.”

Viewers were in fits of laughter listening to Ruth and Eamonn bicker.

One person said on Twitter: “Hahaha Eamonn and Ruth having a domestic on the telly, brilliant these two.”

In addition, another wrote: “I love watching the husband and wife banter between @RuthieeL  and @EamonnHolmes, can we have them on full time it’s so entertaining.”

Meanwhile, a third added: “Eamonn is on one today!”

Eamonn is on one today! 🤦🏼‍♂️😂 #ThisMorning

However, others complained about the bickering.

One even said they had to “switch off” because they couldn’t watch the pair argue.

EAMONN AND RUTH. STOP ARGUING AND DO YOUR JOB! #ThisMorning pic.twitter.com/1jWvNeHbon

I’ve had to turn off #ThisMorning
I cannot listen to Eamonn & Ruth correcting each other every minute. pic.twitter.com/DUsU4kXEk5