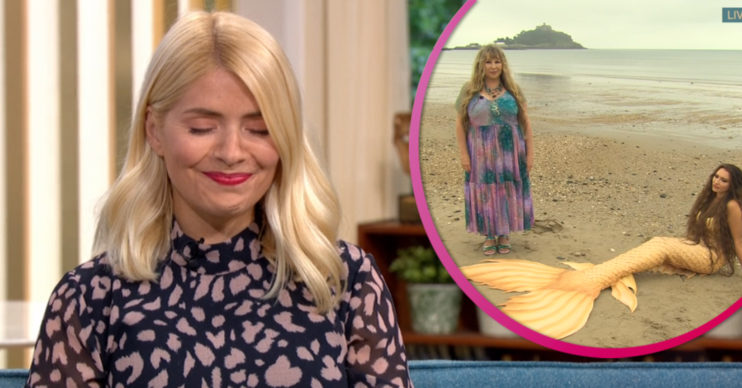 Viewers of This Morning were left in hysterics as Holly Willoughby and Phillip Schofield struggled to compose themselves during a chat with a ‘mermaid whisperer’.

Karen Kay appeared on Thursday’s show live from a beach in Cornwall alongside her mermaid friend Moontail.

Karen insisted mermaids are real and are loving life in lockdown because the oceans are seeing less human activity.

Karen said: “They’re telling me telepathically that they’re happy because there’s been less activity on the oceans.

“There’s rare sea horses coming back to life again and mermaids are guardians of the oceans.”

When asked why she took an interest in mermaids, Karen said: “They’re wonderful. When I moved to Cornwall, I felt a calling in my heart.

“I was a party girl in London and I had the calling to come to Cornwall.”

She continued: “When I came here I just knew that I was home and the ocean just called to me. I found myself sketching mermaids but I’m not an artist.

“It just came through and I felt this call to the ocean and connection with them.”

‘Mermaids are happy in lockdown’

When asked if the mermaids had a message for us humans, Karen revealed: “They are very happy during lockdown because there’s less activity in the ocean.

“They wanted everyone to know the ocean is their home and they are definitely there like fairies are guardians of the land.

“They want us to know that we need to protect the oceans.”

Host Phillip Schofield asked Karen if she could talk to the mermaids to which she said: “I’m trying to hear them but it’s a bit noisy.

“I can’t speak to them right this minute because we’ve got the sea and the ocean in the background.

What on earth have I just watched on ThisMorning.

“But they’re definitely there and aware that this is happening.”

Karen went on to showcase her “mer-med” skills, which is ‘mermaid meditation’.

However, as Karen conducted a session with Holly and Phil, they got the giggles and struggled to compose themselves.

Karen told the pair and viewers to imagine they were on a beach and are slowly walking towards the water’s edge.

She told them to imagine they are “looking out to the ocean” and spot a mermaid, which is swimming towards them.

However, Holly caught the giggles and tried to hide her face with her hair as Phil put his head down.

Fans watching the interview shared their thoughts on Twitter.

What on earth have I just watched on #ThisMorning

@Schofe @hollywills trying not to laugh with this mermaid crank 🤣 #ThisMorning pic.twitter.com/oOHLmzLhbI

#ThisMorning yep..Holly's face sums it up for the mermaid folk… 😂😂😂😂 pic.twitter.com/zi8ABPBVey

I never watch daytime TV but I just turned on #ThisMorning and they are actually having a conversation with a woman who can talk with Mermaids?!?! What the hell????

However, others criticised the hosts for giggling.

One person wrote: “Sick of the private jokes between these 2 so unprofessional.”

Another said: “I think it’s wrong that you feature articles like this to, presumably, laugh at people.”

Sick of the private jokes between these 2 so unprofessional..

I think it’s wrong that you feature articles like this to , presumably, laugh at people .