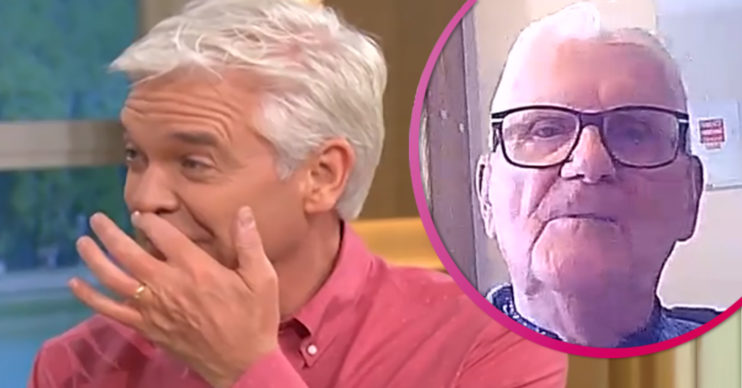 Bob lost his wife Kath and dedicated a poem to her

TV’s Phillip Schofield teared up over a man’s heartbreaking poem about his late wife.

Bob Lowe appeared on Thursday’s This Morning to discuss losing his wife of 65 years, Kath, who died from Alzheimer’s in 2011.

Bob wrote a poem about his loneliness which became the inspiration for the charity The Silver Line.

Part of Bob’s poem, named an Ode to Kath, read: “I am alone, now I know it’s true. There was a time when we were two.

“When darkness falls and curtains drawn. That’s when I feel most forlorn. I’m not quite alone and here’s the proof.

Can we mix our ashes and be together… so we can snuggle up forever and ever?

“But I must be honest and tell the truth. Because beside me in her chair. She quietly waits our time to share.

“Kath said to me, oh, years ago. Darling, when the time finally comes for us to go…

“Can we mix our ashes and be together… so we can snuggle up forever and ever?”

He tearfully said: “Oh! I had not heard that before. That got me that’s for sure.”

Bob said: “It’s the sort of thing you don’t take on board for a while.

“I sit in the lounge and think, ‘she’ll be back in a minute’ but a minute grew to months and that was it.

“Eventually you get to know you’re alone. She was lovely. Everybody loved her.

“She was small and used to say, ‘good things come in small packages.'”

He continued: “I have her ashes in a bag and I take it to bed with me. I talk to her and it’s a great help.

“I’m dreading the coming winter,” before getting choked up.

Viewers were left in tears over Bob’s poem.

One person wrote on Twitter: “Bob’s poem about loneliness on @thismorning has moved me to tears.”

Another said: “Oh Bob has me in tears on #ThisMorning hate to think of people being lonely.”

A third added: “Widower Bob with his moving poem to his late wife is absolutely melting my heart, what a gentleman.”

A fourth added: “That poem, I cant cope. What a lively man Bob is, loneliness must be horrible.”

What did you think about Bob’s poem? Leave us a comment on our Facebook page @EntertainmentDailyFix and let us know.