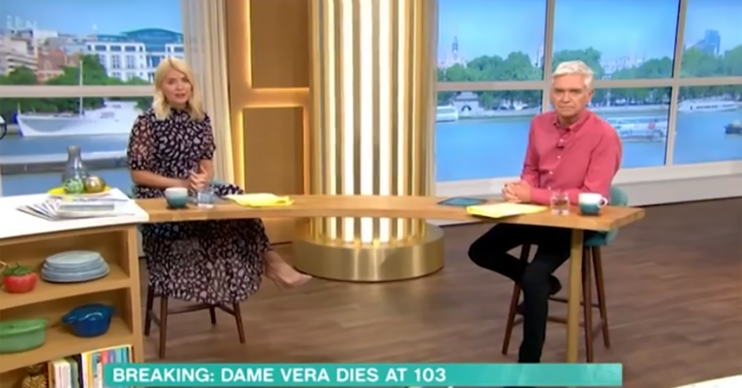 Dame Vera's family confirmed her death in a statement today

The We’ll Meet Again singer, who was nicknamed the Forces’ Sweetheart, has died aged 103 – two days before her 104th birthday.

On Thursday’s This Morning, Holly and Phil started the show by remembering Dame Vera.

Holly said: “We’re starting with some very sad news, Dame Vera Lynn has sadly passed at the age of 103.”

After reading a statement from Dame Vera’s family, Phil continued: “She was always very dignified, she never really put a foot wrong.

“She was so perfect when everybody needed her, a time when people needed her most.”

Holly went on to reveal a childhood memory of Vera.

The presenter said she came across Dame Vera in a garden centre near her home.

Holly explained her mother pointed her out in excitement.

She was always very dignified, she never really put a foot wrong.

The pair went on to speak with Dame Esther Rantzen about Dame Vera’s death.

During World War II, she was an avid supporter of the military and performed for troops at the risk of her own safety.

Meanwhile, when lockdown was enforced, Dame Vera told Brits to “rediscover that same spirit that saw us through the war”.

'She had a natural dignity but she was never too grand. She was a very remarkable human being.'

Dame Vera Lynn, known as the Forces' Sweetheart, has passed away aged 103 and Dame Esther Rantzen shares her memories of the singer.