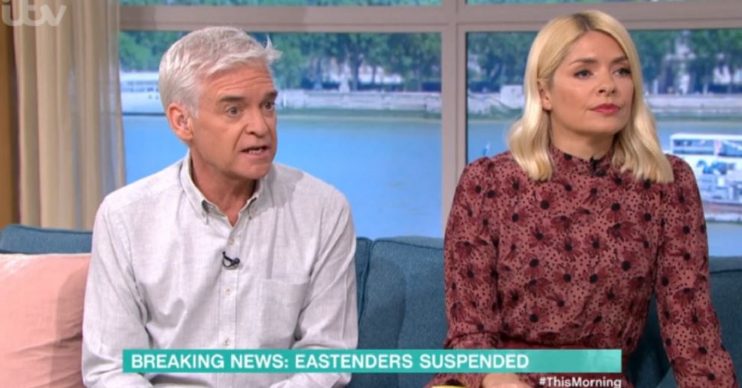 They are said to be in a panic

Holly Willoughby and Phillip Schofield fear they could be struck down with coronavirus after their This Morning boss, Martin Frizell, decided to take two weeks off to self-isolate.

He made the decision after his wife, Fiona Phillips, announced that she has been confirmed as suffering with COVID-19. As a precaution, Martin, 61, will now self-isolate.

Waiting for the result… @schofe @hollywilloughby 🤞🏻

Mail Online has reported that the 40-strong team working on This Morning is now in a state of panic and fear – fearing for their health and the health of those who have appeared on the show.

One reason is that Martin is described as a “hands-on” editor, who has spent a lot of time in the studio giving lengthy debriefings at the end of each two-and-a-half-hour show.

A source told The Sun that Holly, 39, is now “petrified” of contracting the virus.

The insider said: “Martin’s been on set and in meetings all week with everyone – there’s no-one he hasn’t been in contact with.

“There’s a real worry that it could spread through everyone and the show won’t be able to go on.”

Eamonn Holmes and Ruth Langsford presented the show on Friday, but Holly and Phil were in the previous day.

“Still here!” Phil joked at the start of the programme, as a raft of TV shows have been cancelled or changed formats since the worsening of the coronavirus pandemic in the UK.

Read more: When will Sunday Brunch be back? Coronavirus forces Tim Lovejoy and Simon Rimmer off Channel 4

Recent content on This Morning has focused on giving people advice, such as warning them of the dangers of stockpiling and explaining what is meant by social distancing.

But Holly is now said to be considering what extra precautions she needs to take. She reportedly walked out of Celebrity Juice filming after host Keith Lemon came down with symptoms of a mystery illness.

In her tweet, Fiona Phillips said she was suffering from “nothing more than sore throat, dry cough, headache and tiredness” and told people not to panic.

I am in bed with #coronvirusuk It’s not a very pleasant bedfellow, but nothing more than sore throat, dry cough, headache & tiredness. As long as it stays that way….DON’T panic!

It seems as if it is too late for panic not to reach the ITV studios.

Meanwhile, an ITV spokesman said, as reported by the Daily Mail: “Martin hasn’t shown any symptoms and is following government advice by staying away from others. We are following advice from Public Health England. We have constant deep cleaning and there is now a skeleton staff on This Morning.”

What do you think – are Holly and Phil right to worry, or are ITV bosses taking all the necessary precautions? Go to our Facebook page @EntertainmentDailyfix and let us know your thoughts by leaving a comment