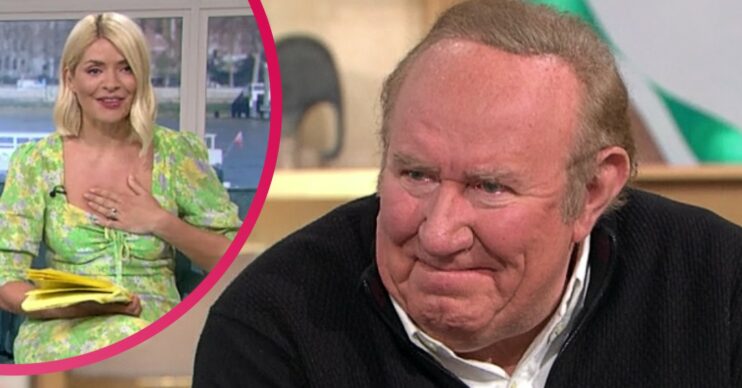 This Morning: Andrew Neil wells up as he praises ‘kind’ Phillip and Holly

Why did he become so emotional?

This Morning guest Andrew Neil moved viewers to tears after he himself welled up after calling hosts Phillip Schofield and Holly Willoughby “so kind”.

The veteran journalist and broadcaster, 72, is a constant figure on the show discussing the topics of the day.

However, on today’s programme (Wednesday June 9) he became emotional and praised the presenting duo.

What happened on This Morning with Andrew Neil today?

During the past two lockdowns Andrew appeared via videolink to debate news items.

However, today he came into the studio for the first time in months.

And, as the trio discussed a variety of topics with Royal Editor Camilla Tominey, Andrew took time out to thank the pair.

“Listen, I wanted to come on today to thank you,” he said.

Read more: Who is This Morning guest Beverley Turner and why has she caused controversy?

“Oh well thank you!” Holly replied in a surprised fashion, adding, “It’s been wonderful having you here this year!”

Phil, also taken aback, then asked: “What do you want to thank us for?”

Andrew emotionally said: “For being so kind, wonderful!”

Why did Andrew become emotional?

It was then Andrew welled up, which also made the presenting duo emotional.

However, Andrew didn’t disclose why he became so emotional or why he thanked Phil and Holly.

It’s not clear what had happened off-camera, although the presenter is launching his brand new news network GB News at the weekend.

Thank you, hope it goes well, thank you, you are soft sometimes!

He had previously described the launch as “fraught”.

“Andrew, that’s a lovely thing to say, and good luck on Sunday!” Phillip eventually said after a pause.

“Thank you, hope it goes well, thank you, you are soft sometimes!” Holly chipped in.

Ah @thismorning what a lovely gentleman @afneil is. Moved me to tears this morning! Talking lots of sense as always. Looking forward to @GBNEWS launching on Sunday and wish Andrew lots of luck with it. #ThisMorning

It just shows how covid has effected everyone. To see @afneil so close to tears was both touching and extremely shocking. Bless your heart, hope you are OK. #thismorning

How did viewers react to Andrew?

Viewers on Twitter were also moved by Andrew’s emotional outburst.

They speculated why he thanked the pair.

“Ah @thismorning what a lovely gentleman @afneil is,” one wrote.

“Moved me to tears this morning! Talking lots of sense as always. Looking forward to@GBNEWS launching on Sunday and wish Andrew lots of luck with it. #ThisMorning.”

Another thought Covid might have had something to do with Andrew’s comments.

They said: “It just shows how Covid has [affected] everyone. To see @afneil so close to tears was both touching and extremely shocking.

“Bless your heart, hope you are OK. #thismorning.”

A third said: “Hopefully, seeing Andrew Neil @afneil getting emotional on #ThisMorning will remind people that even hard-nosed political journalists are real people too.”