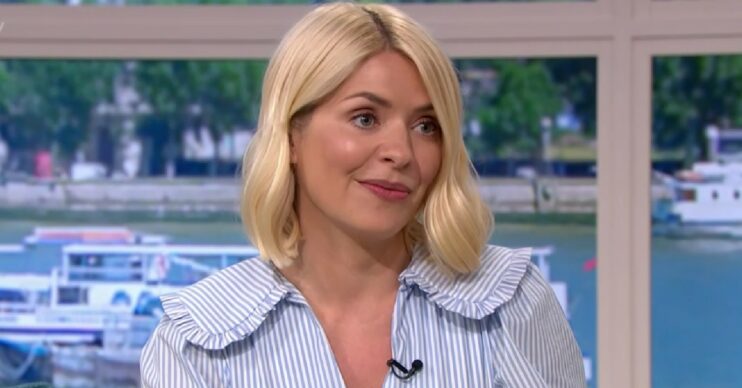 The midi dress went down a treat with her followers!

Holly Willoughby has stunned her Instagram followers as she debuted a summery outfit on This Morning today (June 7).

The 40-year-old presenter returned to the ITV programme alongside Phillip Schofield following a short break.

For the show, Holly graced screens in a gorgeous white and blue striped midi dress from Monsoon.

In addition, the blonde star completed the look with a pair of nude peep toe heels.

The outfit went down a treat with her followers, as she shared her usual #HWStyle post to her profile.

In the shot, Holly was seen standing in the studio ahead of the show.

Showing off the outfit, she penned: “Morning Monday… hope you’ve had a lovely week… it’s good to be back at @thismorning HQ… see you at 10am.

“This dress reminds me of my summer dress at school… Dress by @monsoon heels by @officeshoes.”

And it appears fans adored the look!

One wrote: “Love this look! Perfect for summer.”

A second shared: “This dress is gorgeous!”

In addition, a fourth commented: “Oh Holly… You just look fab in everything.”

Meanwhile, another likened Holly to Dorothy from The Wizard of Oz.

They said: “Your little rainbow necklace would look so perfect with that. The Dorothy vibe dress & the Somewhere Over The Rainbow tune is in everybody’s head.”

Holly appears on The Masked Dancer

Meanwhile, it comes days after Holly appeared as a guest judge on The Masked Dancer.

During the show, she wore a vibrant yellow one-shoulder dress by Alex Perry.

And she compared the design to a sponge costume worn by the show’s backing dancers.

Poking fun at her dress, Holly later said on Instagram: “Thank you to the whole @themaskeddanceruk team for allowing me to come and play.