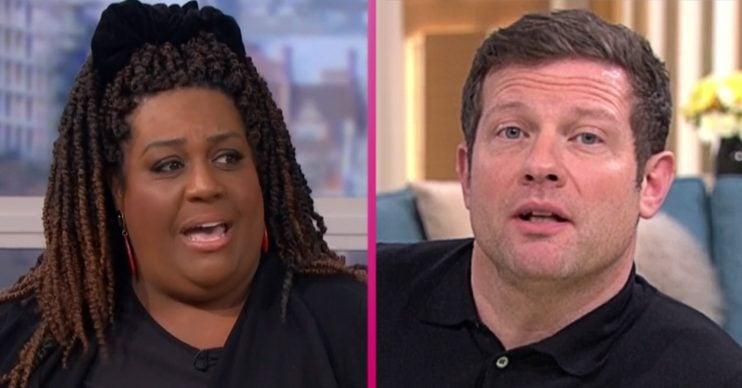 This Morning: Alison Hammond and Dermot O’Leary to host show next week

Eamonn and Ruth usually present during half term

This Morning stars Alison Hammond and Dermot O’Leary are taking over the show next week.

The duo usually host the ITV programme every Friday after replacing Eamonn Holmes and Ruth Langsford.

However, the former presenters will not appear this May half term.

Alison Hammond and Dermot O’Leary to host This Morning

Meanwhile, an ITV spokesperson confirmed the news during a promo today (May 24).

But the change didn’t sit well with some fans.

Taking to Twitter, one wrote: “Good God, Alison & Dermot ALL next week… #ThisMorning.”

A second shared: “Watch Alison and Dermot all next week? Nope #ThisMorning.”

A third added: “Alison and Dermot all next week… anyone got Netflix suggestions for the week? Preferably a series with 100+ episodes.”

In addition, a fourth said: “Are you [bleeping] joking?”

‘What about Eamonn and Ruth?’

Meanwhile, others questioned why Eamonn and Ruth have been replaced.

One tweeted: “I thought Eamonn and Ruth were doing the holidays? So why are Alison and Dermot presenting all next week? #ThisMorning.”

I’m going to be in a right huff all week

Another wrote: “It’s my week off too, I don’t want to watch Dermot and Alison!! Fuming – I’m going to be in a right huff all week… I was looking forward to seeing Eamonn and Ruth again.”

A third said: “Did they just say Alison and Dermot ALL next week? What about @EamonnHolmes and @RuthieeL?!”

Watch Alison and Dermot all next week? #ThisMorning pic.twitter.com/StIp7te46R

@thismorning originally stated @EamonnHolmes & @RuthieeL would be covering all school holidays, just seen announced will he Dermot & Alison next week, no disrespect to them but this is so disappointing #ThisMorning

A fourth pointed out: “@thismorning originally stated @EamonnHolmes & @RuthieeL would be covering all school holidays. Just seen announced it will be Dermot & Alison next week, no disrespect to them but this is so disappointing #ThisMorning.”

“Why are Alison and Dermot on next week? What happened to Eamonn and Ruth doing the holiday cover,” a fifth said, adding: “Switch off for me all next week then.”

But it appears one viewer was looking forward to Alison and Dermot on the show.

They said: “I love Alison and Dermot (especially Dermot) and love that they’re on all next week (as per promo)… but what about Ruth and Eamonn?”

Meanwhile, a spokesperson for ITV told Entertainment Daily!: “Alison and Dermot were always due to present next week.

“Eamonn and Ruth will be presenting over the summer.”