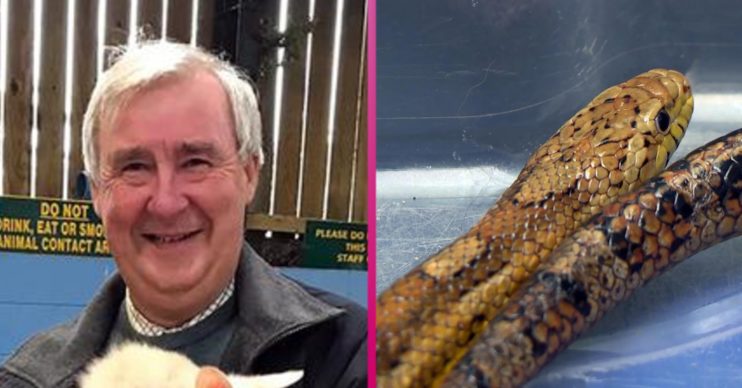 The Yorkshire Vet left Channel 5 viewers disturbed last night as it featured a poor snake with a prolapsed penis.

Tuesday (September 8) evening’s episode of the documentary series featured a number of more exotic animals, including a cute little wallaby and an alpaca called Amadeus.

What happened with the snake on The Yorkshire Vet?

It also featured an American corn snake called Sandy, who was in the vet practice in Thirsk with a problem with his genitals.

Vet Sara and nurse Kate had to operate on the reptile because his penis wouldn’t go back in.

The narrator explained: “He needs the surgery to stop his untimely flashing.”

Sara said, as she looked over the animal on the operating table: “Snake anatomy is very unique. It’s basically as if each one of those is a half of the penis.

“So he has two and they have like, little spikes that help them to grip to the female.”

Before trying to stuff Sandy’s tackle back in, she sprinkled sugar all over it.

Sara told viewers: “Basically, what I’m doing is putting sugar over the wound because it will suck up the water and make the tissues less swollen. So that we can, hopefully, put them back into where they should be.”

She initially had trouble, but in the end she was able to get the two halves of the penis back in.

To be safe, she decided to sew up the opening so there would be no risk of another prolapse.

Snakes, she explained, do not urinate through their penises like mammals, so it would just mean he was unable to reproduce.

What did The Yorkshire Vet viewers say about sandy the snake?

Reacting on Twitter, some viewers were left gagging, while others admitted they were fascinated watching the procedure.

One said: “Watching #TheYorkshireVet and they’re operating on a snake’s prolapsed penis. She’s seasoned the snake [bleep] with some weird salt too. Intrigued and disturbed.”

Another replied with a string of nauseated emojis.

They’re operating on a snake’s prolapsed penis… intrigued and disturbed.

Someone else joked: “Don’t you hate it when your snake penis won’t go back in? #TheYorkshireVet.”

Read more: The Truth About Cosmetic Treatments: Viewers grossed out by ‘bone-scratching’ procedure

Another wrote: “Things I’ve learned today. Snakes have two penises. And I still don’t like them #theyorkshirevet.”

“That poor snake having his tackle played with,” one viewer said, adding: “Or his he lucky?”

Others called it a “fantastic” show”.

Things I've learned today. Snakes have two penises. And I still don't like them #theyorkshirevet

What did you think of The Yorkshire Vet? Leave us a comment on our Facebook page @EntertainmentDailyFix and let us know.