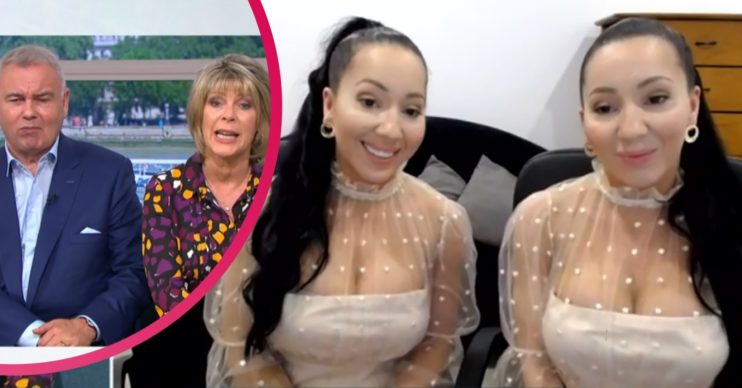 The ‘world’s most identical twins’ appeared on This Morning on Monday (July 27) and viewers were all saying the same thing about them: they could easily tell them apart.

Anna and Lucy DeCinque have been on the show before and this time they were live from their home in Perth, Australia to talk about their baby plans.

Hosts Eamonn Holmes and Ruth Langsford chatted to them about life as twins and the women, who share a boyfriend, claim they are recognised as the world’s most identical twins.

What did the world’s most identical twins have to say?

The twins, speaking pretty much in sync, revealed they share absolutely everything, including partner Ben.

Anna added: “I try and trick him sometimes and say ‘this is not Anna’ and he’ll say: ‘It’s Anna’ and I’m like ‘Oh my God I can’t believe he knows’.”

They said they’ve had separate boyfriends in the past, but they never accepted the girls’ bond. However, Ben treats them equally.

But Ruth questioned whether there was ever any jealousy between them.

Lucy continued: “If he kisses Anna, he’ll kiss me straight after, it’s been equal from day one and it’s always going to be like that.”

What did viewers think about the world’s most identical twins?

Viewers weren’t convinced the girls were as identical as they were claiming though.

Some saw a difference in face shape, and others noticed a beauty spot on Lucy’s face.

They are hardly the worlds most identical twins. 5 mins on the tv and already could see differences. #twins #ThisMorning #godhelp

Those most identical twins on #ThisMorning one has a scar in her forehead and the other has a ‘spot’ on her cheek….one also looks like she has a bigger face

Really? I think I could tell the difference! #twins #thismorning

#ThisMorning . It’s a challenge listening to those girls. Lucy has a beauty spot on her face so not identical!

The twins also spoke about their baby plans.

Ruth said: “You’re now considering having children, but you want to do that at exactly the same time, like you do everything else.”

The girls replied: “We want to experience pregnancy together, we want to do everything alike together, we’ll die together, that’s how it’s going to be.

“It’ll be IVF if we have to go down that road.”

They admitted it would be “a challenge”, but they wanted to do it. They also agreed it could be seen as “obsessive”, but this is how they want to live their lives.

The twins also added they didn’t mind if one of them got pregnant with a boy and the other a girl.