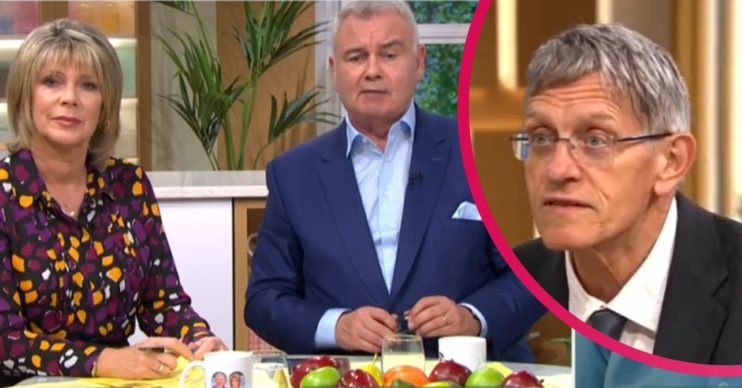 His advice has not gone down well with viewers

Simon Calder appeared on This Morning on Monday and seemingly advised those holidaying in Spain to ‘cheat’ the new quarantine rules implemented by the UK.

Due to a surge in coronavirus cases in Spain, the government announced that everyone returning from there must self-isolate for 14 days. The rules came into play almost immediately after the announcement from midnight on Saturday.

What did Simon Calder say on This Morning?

Joining This Morning hosts Ruth Langsford and Eamonn Holmes in the studio, travel expert Simon was on to discuss the new rules.

I am gobsmacked by this advice from Simon!

They also spoke to Emily Woods via video link who is currently in Spain with her husband and son.

Emily, who runs a PPE charity, is on a working holiday, but is faced with the two-week lockdown when they go home.

She said: “That will have a huge impact on me and the work I’m doing at the moment because our focus is on getting PPE to the frontline, so there’s issues around that.”

She then said her other children were in Majorca with their father and that they would have to quarantine too so it will impact the family holiday to France in August.

Simon said: “I’m really, really sorry for the situation you and your family and many other people are finding themselves in on this sunny morning in Spain.”

He then continued to offer her some bizarre – and some might say dangerous – advice to ‘cheat’ the quarantine rules.

“The only way to reduce the two weeks of quarantine is to leave the country again. To go to France or Italy or anywhere else you like and that way you can reduce the quarantine time.”

He said you could catch another flight to France, or even travel back home through the country to avoid the rules.

Ruth wants This Morning viewers to stick to the rules

Presenter Ruth seemed a bit confused and said: “So you’re saying you come home, start quarantine, then pack your bags and leave again. You’re not allowed to do that?”

Even Emily seemed unhappy with that suggestion, questioning the morals and the logistics, saying they were “potentially infecting others” by doing it.

Ruth went on to say: “The rules are we quarantine, that’s the government advice at the moment, so we have to stick with that.”

This Morning viewers outraged at advice from Simon Calder

They called him “irresponsible” and said he should be “ashamed”. They also called for This Morning not to have him back.

I am gobsmacked by this advice from that Simon!!!! Very irresponsible!!!!!#thismorning

Did anyone else just hear the absolutely appalling travel advice on @thismorning? Effectively advising people how to avoid 2 week quarantine rules & telling someone to travel to France a week after returning from Spain. This is a pandemic, @itv you should be ashamed #thismorning

Its a bit irresponsible of @itv to give people ideas on avoiding quarantine on #thismorning. This isn't a game, it's literally life or death for some people!

This is one of the most astonishingly stupid pieces of television I can remember. Dangerous advice from their ‘expert’, it’s essentially how to get around the rules. The UK is insane. #thismorning #itv @thismorning pic.twitter.com/KYK0WaQT0A

Irresponsible @SimonCalder on @thismorning actively giving out advice on how people can exploit loopholes on government advice to avoid quarantine when returning from abroad. #publichealth is everyone’s responsibility! #COVID19 #thismorning

#ThisMorning How irresponsible for your man to tell her to break her 2 week quarantine & travel to France potentially infecting others as they go, who then infect others🤬. No sympathy! You're choice! We're in a pandemic! People are ill& dying &can't see loved ones due to C-19!!

Completely irresponsible advice from travel ‘expert’ @SimonCalder on #ThisMorning – yes it might be a loophole in the rules, but that does NOT mean we should use it and risk infecting countless people in the UK and other countries 🙄
Shocking from @ITV @thismorning

You’re not welcome back to @thismorning, Simon Calder! You did the most unforgivable thing in your career – tell people to break quarantine! 😡#thismorning pic.twitter.com/whIcQ2D5wb

Hey, @thismorning Don’t invite Simon Calder back, he’s a danger to public health and encourages people to spread coronavirus across Europe. A deeply irresponsible man and shill for the travel industry with no morals 🙂 #thismorning