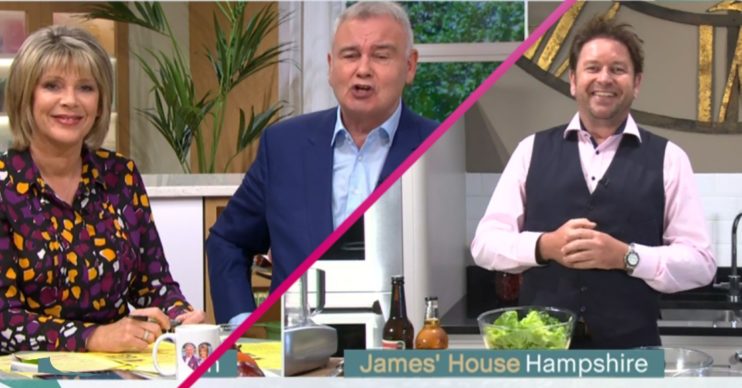 She wasn't having her husband insulted

Ruth Langsford defended Eamonn Holmes on This Morning today after James Martin made a cheeky jibe over a fish finger sandwich.

The celebrity chef was cooking from his kitchen at home for the presenting duo and was making a slightly different version of one of Eamonn’s favourites.

But Eamonn wasn’t impressed with the idea that James was making it with brioche rather than good old-fashioned white sliced bread.

What did James Martin say to Eamonn Holmes on This Morning?

There are many things I’ll say about my husband, but he’s not thick.

Read more: This Morning fans hit out at ‘irresponsible’ Simon Calder over advice to ‘cheat’ quarantine

As James cooked up a very professional looking sarnie – not a frozen finger in sight – he battered his own fish and laid it out on a brioche bun.

Ruth quipped that due to the size of the sandwich it should actually be called a “fish arm” rather than a finger!

But Eamonn insisted it needed to be on white sliced bread rather than fancy “bri-oochy” as he called it.

James didn’t seem happy with the request, but slapped together a ‘special’ sandwich just for Eamonn.

In the studio, Ruth tucked into hers with a knife and fork, while Eamonn, moaning about the size of Ruth’s sandwich, happily bit into his version in a sliced loaf.

James told the presenting pair: “Ruth, your sandwich is named after you because it’s delicate, sweet, refined, and perfect.

“Eamonn’s is named after him – it’s a bit chunky and a bit thick.”

Ruth clearly wasn’t too impressed with James’s cheeky remark and hit back: “There are many things I’ll say about my husband, but he’s not thick.”

She then affectionately told Eamonn to enjoy his food.

What did viewers say about James Martin’s fish finger sandwich?

It seemed most of those watching at home were very much on Eamonn’s side.

They defended him saying brioche is ‘pretentious’. They also said that James’s fish ‘fingers’ weren’t actually fingers, they were just a bit of cod.

Others said it was ‘way too much effort’ for a fish finger sandwich.

That is not a fish finger sandwich! Firstly, that's a roll/bap. Secondly, that's a bit of cod you get from a chippy! #ThisMorning @thismorning

That is not a fish finger sandwich #ThisMorning

That is way too much effort for a fish finger sandwich! #ThisMorning