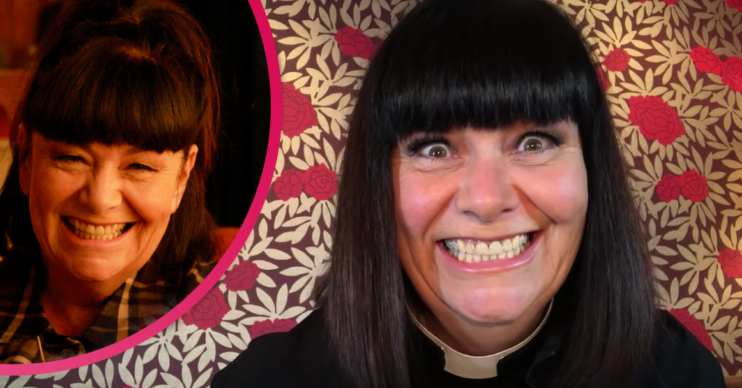 The Vicar of Dibley in Lockdown: BBC releases first look at new episodes

We can't wait to see The Vicar Of Dibley again!

The Vicar of Dibley in Lockdown will air next month and BBC has offered a first look at the episodes.

The BBC One show starring Dawn French ran from 1994 to 1998, with annual specials afterwards until 2007.

And now the channel has released a first look image from the new episodes that is sure to get fans smiling again.

What’s happening in the first look image from The Vicar of Dibley in Lockdown?

In the image, vicar Geraldine Granger (French) is seen sitting on a sofa smiling her head off.

With her is friend and chairman of the Dibley Parish Council, Hugo Horton, played by James Fleet.

The BBC says that Geraldine will deliver three viral sermons, and the last will feature Hugo.

“Hugo is finding it difficult to listen to his father through lockdown tell the same anecdotes over and over again but then Hugo may perhaps be guilty of the same crime,” the BBC commented.

What else will be happening in new episodes?

Beginning on Monday December 7, the three mini-episodes will precede classic episodes from the vaults.

In the first mini-episode, the vicar has to explain the difference between metres and miles when it comes to social distancing.

Geraldine finds that getting a haircut during lockdown from a friend doesn’t guarantee success.

Then, in episode two, Geraldine finds that getting a haircut during lockdown from a friend doesn’t guarantee success.

Especially when the hairdresser in question is more used to working with animals than humans.

The BBC says that the vicar also spends some time with children from the local primary school.

What is The Vicar Of Dibley and when did it finish?

The Vicar Of Dibley was created by Richard Curtis, the man behind classic comedy series Blackadder and hit movies like Notting Hill and Four Weddings And A Funeral.

Beginning in 1994, it told the story of female vicar Geraldine Grainger, who surprised locals when she became the village of Dibley’s first female vicar.

With characters like David Horton and Jim Trott, as well as the hilarious Alice Tinker, the show became a huge hit.

Other members of the original cast including Liz Smith (Letitia Cropley) and Roger Lloyd-Pack (Owen Newitt), and James Bluthal (Frank Pickle) have also passed away.

The Vicar of Dibley in Lockdown airs on BBC One, Monday December 7, at 8.50pm.