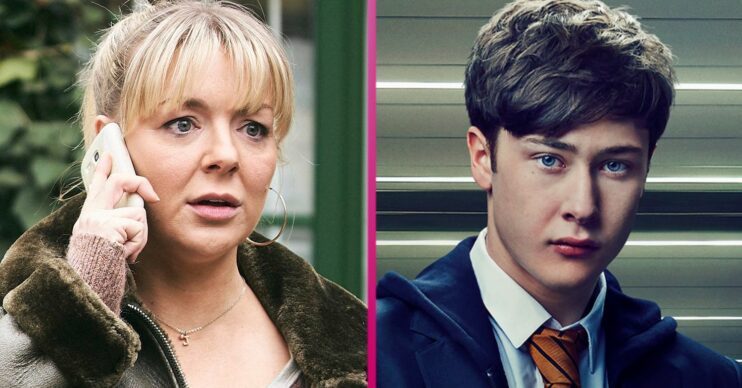 The Jenna and Kyle sex mystery has us gripped

The Teacher kicked off on Channel 5 on Monday, and it was every bit as good as we hoped it would be – here’s our review of episode one.

The four-part series tackles a subject that we’ve all read about in the papers.

And it’s a divisive subject…

Which is EXACTLY why it makes a good drama.

Here’s our review of The Teacher on Channel 5 and nine burning questions we want answering as the series progresses.

Read more: The Teacher on C5: What’s it about, how many episode is it and is it a true story?

1. Did Jenna have sex with Kyle?

A teacher who has sex with a student is considered the lowest of the low.

It’s an unspeakable abuse of trust, unethical and predatory.

But you’d be hard pushed not to find sympathy for Sheridan Smith’s character Jenna in this first episode.

She’s clearly a barely functioning alcoholic, who self-medicates with booze.

At the end of The Teacher episode one, Jenna is suspended from her job and arrested.

Police arrest Jenna under section 16 of the sexual offences act.

She stands accused of engaging in a sexual act with a minor on the premises of Lazarus.

The evidence, at the moment at least, suggests that she DID have sex with Kyle.

She was at the nightclub, she was “legless” and viewers seem to see the pair getting intimate in a toilet cubicle.

The next day, she finds a used condom wrapper in her handbag.

Add that to Kyle’s message which appears to confirm they had sex, and the evidence doesn’t look good for Jenna.

If she can’t remember the evening, how does she know she DIDN’T have sex with Kyle?

The police sent her for a forensic exam, and are investigating the CCTV at the nightclub – so time will tell.

2. Why did Jenna lie about her mobile phone?

But she was lying – and had it at home.

Which is just as well.

The police would have confiscated her phone, and discovered the incriminating message from Kyle confessing they’d had sex.

But why did she lie about the phone unless she has something to hide?

3. Should Jenna be a teacher at all?

Even if Jenna didn’t have sex with Kyle, there’s a question mark over her head.

She drinks to self-medicate – often to the point of black-outs.

At the beginning of episode one, Jenna is seen waking up in a stranger’s bed after a one-night stand.

She then staggers into work, and feels so ill she vomits behind a tree on the school field.

Jenna struggles to do her job because her hangover is so bad.

This isn’t just a one-off either.

She “doesn’t remember any of the night before” when she drinks to excess.

So why does she keep on drinking?

It is okay for a school teacher to behave like this? Or is a teacher allowed to have their own life outside of work?

Whatever you think will no doubt cloud your judgement of Jenna over the next three episodes.

And let’s not forget, Jenna referring to pupil Izzy as a “bitch” and clearly flirting with Kyle even before the incident in the nightclub…

4. What’s the story with Jenna’s dad?

Jenna clearly has a fraught and difficult relationship with her dad.

She has followed in the footsteps of both parents, who were teachers.

Her dad is held up as a pillar of the community.

But it’s clearly her mum, who worked in a troubled school, who Jenna admires.

Sadly, Jenna’s mum died 20 years ago, and Jenna still seems to be grieving.

And her dad is cold and critical.

Also, when Jenna is told to leave the school after the allegations, she appears to suspect her dad of making them.

What is going on with them? Is there more to it than just an overbearing father with too-high expectations?

During an awkward conversation between Jenna and her dad, he mentions a man called Sean.

It’s the birthday of Jenna’s late mum, and she visits her dad Roger to pay her respects and to pay tribute.

While there, Roger mentions he’s invited Sean, something which doesn’t go down well with Jenna.

Luckily for her, Sean can’t make the evening because of “childcare issues”.

He’s obviously not family, as Jenna said it was a private affair and he shouldn’t have been invited.

6. Should we feel sorry for Jenna?

Yes, there are things about Jenna’s behaviour that make us feel uncomfortable.

And she’s clearly a flawed human being.

But therein lies the most interesting aspect of the series.

She’s in her late 30s or early 40s, and still goes to “meat market” nightclub Lazarus to get legless and laid.

Most people would be H-O-R-R-I-F-I-E-D if their teacher turned up at the same nightclub as them.

Sometimes it feels like Jenna wants to be her students’ friend, rather than teacher.

And where’s her life outside of school?

Her only friend seems to be fellow teacher Pauline, and her love interest is also a teacher at the same school.

Actually, although she’s popular with her pupils, Jenna’s life seems a bit sad.

Most of her friends and colleagues are settled down, with kids.

Anyone who continues drinking until they blackout is running from something.

It’s hard not to feel sympathy.

7. How old is the actor who plays Kyle?

Samuel Bottomley portrays 15-year-old Kyle in The Teacher on Channel 5.

But, in real life, the actor is 20 – five years older than his character.

That would explain why he looks so much older than some of his classmates!

8. Is there a BAFTA for best drunk acting?

Is there a BAFTA award for best drunk acting?

If there’s not, there should be.

And Sheridan Smith should win it.

The scenes where she is drunk and letting her hair down in Lazarus are all too believable.

The series is every bit as compelling as it is because of Sheridan’s performance.

9. Who made the report against Jenna?

Somebody at the school made the report of inappropriate behaviour between Jenna and Kyle.

We know Nina saw Jenna stroke Kyle’s arm in class – and she clearly despises her colleague.

But Nina wasn’t at the nightclub…

Could it possibly have been Jenna’s best friend Pauline, trying to give Jenna a wake-up call?

Or is there another interested party who could have reported Jenna to the school?

The Teacher continues on Tuesday February 01 2022 at 9pm on Channel 5.

Do you think Jenna had sex with Kyle in The Teacher? Leave us a comment on our Facebook page @EntertainmentDailyFix.