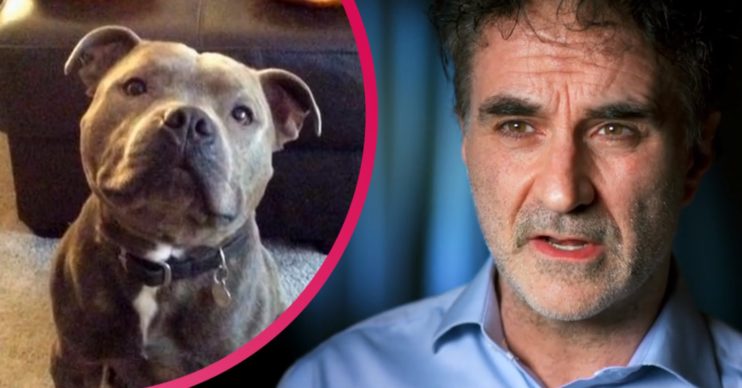 The Supervet viewers were left weeping with relief as star Noel Fitzpatrick rushed to save a puppy who stopped breathing.

During Thursday (July 23) evening’s episode of the Channel 4 programme, Staffordshire bull terrier Jasper went in for surgery to correct a problem with his leg bones.

What happened on The Supervet?

But as the team got him onto the operating table, he went into cardiac arrest and stopped breathing.

In a tense moment, Noel and the others performed chest compressions on Jasper while monitoring his condition.

Read more: Supervet viewers in tears over adorable puppy who was beaten and left with heartbreaking injuries

Thankfully, he started breathing again – although his surgery had to be postponed.

“He’s always wagging his tail,” Noel observed, as they wrapped Jasper in a towel.

Later in the programme, it revealed that the pooch made a full recovery after undergoing intense physical and hydro therapy to strengthen his muscles.

“Five months after his initial operation, Jasper was able to walk and run freely,” the voiceover revealed.

Reacting on Twitter, one viewer said: “How cute is Jasper on #thesupervet? Such a happy dog! My heart went when he stopped breathing! Was bracing myself for dust in the eyes and bad news! So glad he pulled through.”

Jasper, that got me.

Another replied: “Same here! I love Staffies. I’m considering owning one in the future.”

A third wrote simply, “Jasper #TheSupervet” alongside a heart emoji.

Someone else said, with a string of crying emojis: “Bloody hell Jasper, that got me #TheSupervet @ProfNoelFitz.”

How cute is Jasper on #thesupervet ❤️ such a happy dog!

My heart went when he stopped breathing! Was bracing myself for dust in the eyes and bad news! So glad he pulled through!

I love Staffies. I’m considering owning one in the future.

My sister’s Staffie is 13 years old and she’s an absolute sweetheart.

Jasper isn’t the only Staffie to tug on telly fans’ heart strings this week.

Wednesday evening’s episode of Paul O’Grady For the Love of Dogs had viewers feeling emotional when it revealed one of the stars of the show, Frank, had died.

The playful Staffordshire bull terrier had to be put down at the age of 13 when his owner, Rachel, took him to the vets over sores on his face.

Fighting back tears on spin-off show What Happened Next, Rachel explained that she was initially advised to leave the room during Frank’s final moments. Vets worried it might prove too upsetting.

But she refused, remaining by his side until the end.