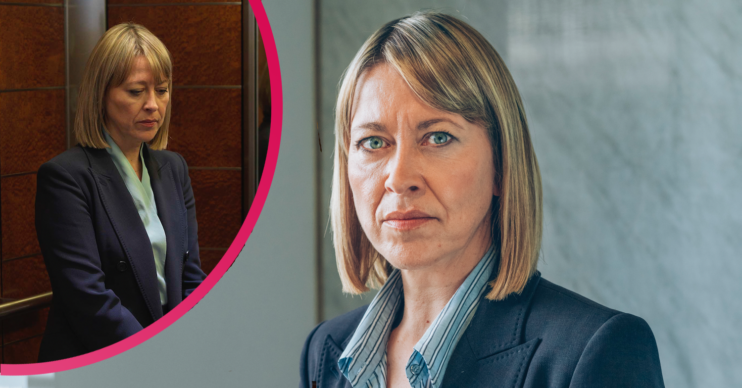 Everything was not okay in episode one

The Split series 3 hit iPlayer yesterday (Monday 4 April) and, while we’re still only mid-binge, we have some serious questions to ask – mostly what’s wrong with Hannah Stern?

There are a few spoilers for eps 1 & 2  here, so if you haven’t got round to starting series 3 yet, hurry up!

Read more: Emmerdale cast for 2022 – who’s ruling the roost in the village this month?

Obviously, we’re still reeling after the death of Rose’s lovely, lovely husband James, but is there another death on the cards?

Hannah – played by the phenomenal Nicola Walker – is going through a horrific times.

The ‘nice’ divorce she and Nathan (Stephen Mangan) were planning has seen the wheels fall off now he’s expecting a baby with his new partner, Kate.

Hannah has also had her eldest daughter return from travelling, complete with a fiance.

What’s wrong with Hannah in The Split?

Is there something more going on with Hannah?

It hasn’t escaped our attention that Hannah has been seen clutching her chest.

While she’s probably ‘just’ suffering from panic attacks (hardly shocking after the few years she’s had) could it be more serious?

Is Hannah actually going to die from a broken heart? Is that going to be how The Split ends?

Speaking to website TV features, Nicola says she’s happy with the way the show ends, but doesn’t give more away than that.

“Endings are difficult. I think Abi has managed to create a really satisfying ending, and we don’t get that in drama very much anymore. How many shows have we all watched over the pandemic where you’re left unsatisfied in the last 15 minutes?

“That doesn’t happen with this show. Abi has taken great care of every single character and I feel by the end that you know they’re going to go on. In my head, they’re all getting up and going on with their lives when the credits roll.”

The big question so far has been whether Hannah ends up with Nathan or old love Christie (Barry Atsma)?

Why did The Split kill off James?

Speaking to Bustle, The Split’s creator and writer, Abi Morgan, explained why she killed off James: “I’ve got to (BLEEP) it up a bit. You know, you don’t want to watch three couples with everything going okay.

Read more: Just what did that After Life ending mean? Ending of Netflix hit explained

“So I just, you know, ran out of ideas basically. It just felt like, okay, come on it works! And it did.”

She added: “To kill a much-loved character is always hard.”

Could this be a hint that another much-loved character is going to die?

Could fans take it? Mostly, they just want Hannah to be happy.

“The Split is back on!!!  Please can Hannah just get with Christie and be happy for the love of god!!!,” tweeted one fan.

Another said, “The Split 1×01 (Hannah speaking Ruth’s words): “men come and go but the most important relationship in life… is the one you have with yourself.” Hannah Defoe is going to end up alone isn’t she…

While a third added: “As much as I’m excited about the split returning and getting both of my comfort characters back I don’t want to say goodbye.”

The Split airs on BBC One on Mondays at 9pm. All six episodes will be available on the BBC iPlayer from April 4.

Are you watching The Split? Tell us on our Facebook page @EntertainmentDailyFix.