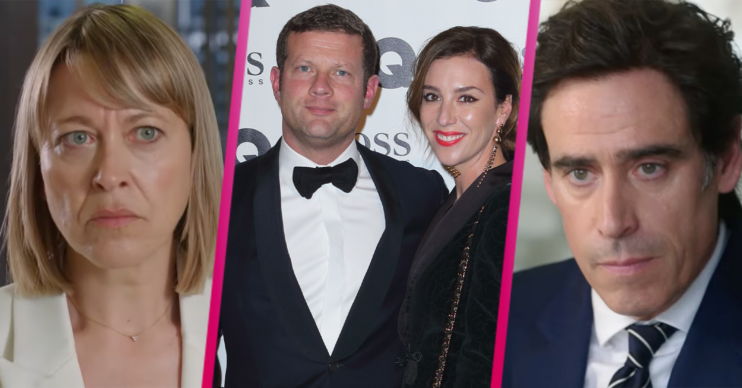 The Split on BBC One: Dermot O’Leary ‘very excited’ over role in final series

His wife Dee Koppang-O'Leary is lead director on the show

BBC drama The Split returns for its third and final series tonight (April 4) – and Dermot O’Leary has a part in season 3!

As well as returning favourites Nicola Walker and Stephen Mangan, the telly fave will be cropping up as series three progresses.

Jumping ship temporarily from ITV and This Morning, Dermot O’Leary has a cameo in the new series of the BBC legal drama – a show on which his wife Dee Koppang O’Leary is lead director.

Who does Dermot play in BBC drama The Split?

Speaking ahead of the first episode, Dee revealed that her hubby has landed a role in the final series.

And, she said, he is “very excited” to be a part of the show.

Read more: Final series of The Split will be ‘most heartbreaking’ yet

He will feature in a daytime TV segment that airs as part of one of the episodes.

Dermot is such a huge fan of The Split anyway, he was so over-excited to be part of it.

Dee said: “You never want it to feel nepotistic, but it was scripted that one of the characters is interviewed on a breakfast TV show.

“It was one of those funny things where I felt it’d be so weird to get someone else!

Dee then revealed that Dermot is a “huge fan” of the show.

“Dermot is such a huge fan of The Split anyway, he was so over-excited to be part of it.

Read more: First look images from the new series of The Split

“I recently got to show him his section – and I mean it’s a tiny cameo – but he was very excited.

“We’ve got some really good cameos this season, from Lily Cole to Tom Rhys Harries to Lindsay Duncan, it’s amazing!”

How long has Dermot O’Leary been married?

The This Morning presenter tied the knot with Dee in 2012 after 10 years of dating.

And the couple – who are parents to a little boy named Kasper – have one of the strongest marriages in showbiz.

Earlier today, Dermot took to Twitter to wish Dee good luck with the first episode of The Split.

Sharing her tweet about the show, he spoke of his pride for his wife.

The first ep is a cracker you won’t be
disappointed. But there will be tears… best bring some gin for the journey x https://t.co/1qkwMGqt6N

“V proud of you. The first ep is a cracker you won’t be disappointed. But there will be tears… best bring some gin for the journey,” he concluded.

The Split airs on BBC One tonight (April 4) at 9pm. All six episodes will be available on the BBC iPlayer from April 4.

Are you looking forward to seeing Dermot O’Leary in The Split? Tell us on our Facebook page @EntertainmentDailyFix.