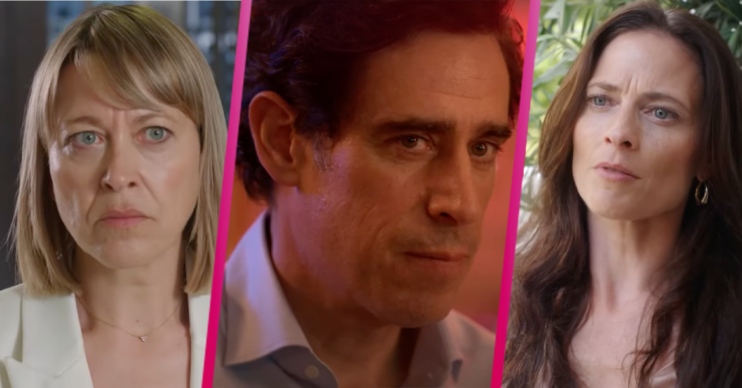 The cast of The Split return to BBC One tonight (April 4) for the third and final series of the brilliant legal drama.

Nicola Walker and Stephen Mangan lead the cast as Hannah and Nathan Stern, a couple whose romance has hit the rocks after 20 years together.

The show’s creator has teased this will be the most heartbreaking series yet, as divorce lawyer Hannah is confronted by her own divorce from Nathan.

Who does Nicola Walker play in The Split?

Nicola plays Hannah Stern and, as series three begins, we find her “in the midst of her divorce” from Nathan as they try to come to an amicable separation agreement.

As Hannah and Nathan begin to divide up their 20 years together, Hannah faces what she is about to lose and a shocking revelation dramatically changes the stakes.

Will they find a path through the wreckage or is The Split simply too deep to repair?

The actress said: “We find her in the midst of the divorce, but specifically at the end of a working day she’s getting ready to go and meet him for dinner, so she’s quite hopeful.

“Admittedly, the dinner is a meeting of school parents so this is one of those last meals with vague parent friends. But Hannah is hopeful, there’s still everything to play for,” she said.

The cherry on the cake is that Kate is incredibly successful, intelligent, beautiful and a great deal younger.

However, a new arrival called Kate complicates things for Hannah and Nathan.

“When Hannah meets Kate she didn’t realise that Nathan was seeing somebody.

“The cherry on the cake is that Kate is incredibly successful, intelligent, beautiful and a great deal younger.

“All of this revelation takes place while trying to eat food with chopsticks, which I think is a beautiful touch from [creator] Abi Morgan!” Nicola said.

What else has Nicola Walker been in?

Other than her role in The Split, Nicola is perhaps best known for Unforgotten.

She played DCI Cassie Stuart from 2015 to 2021, with her exit sending shockwaves through the fanbase.

Stephen plays Nathan and he sounds pretty distraught that the series is ending.

“You want to do it forever and let Nathan and Hannah work out if they want to be divorced for the next 30 years!” he said ahead of the first episode.

He added: “As actors you define your life by these big projects, so I had the Episodes years and the Green Wing years, and now I’ll have The Split years.”

Of course, Stephen played Guy Secretan in the Green Wing and Sean Lincoln in Episodes.

He’s also voiced Postman Pat, Bigwig in Watership Down and got his big TV break playing the title character in Adrian Mole: The Cappuccino years.

Christie’s romance with Hannah was the catalyst for her split from Nathan.

He left and headed back to the States at the end of season two, disillusioned because there was no chance he could be with Hannah.

Read more: Series three of The Split will be the ‘most heartbreaking’ yet

However, he’s back in London for series three, so will sparks fly?

Barry said: “I won’t spoil it too much, but it’s still an ending where there’s room to fantasise what might come after that.”

Aside from The Split, Barry has also appeared in The Hitman’s Bodyguard and a number of foreign language mini series.

At the start of series three, viewers find Nina trying to work out how to be “a mum, a human and a lawyer” after going straight back to work after having daughter Cora.

“She spends her time lugging around all the baby gear and she’s still wearing her heels, she will not give up her old existence!” Annabel said.

And she said it’s a case of life imitating art.

“Personally I went back to work on series two of The Split when my own daughter was three months old, so around the same as Nina!” she said.

Aside from The Split, Annabel has also appeared in The Salisbury Poisoning, Being Human, Inspector George Gently, Jane Eyre and Britannia.

Veteran actress Deborah plays Defoe matriarch and mother of three daughters – Hannah, Nina and Rose – of whom all but the youngest are practising divorce lawyers.

You’ll certainly recognise her as she’s been in Collateral, Vanity Fair, The Lady in the Van, Torchwood and Cranford among many other films and TV shows.

Series three sees Rose coming to terms with the fact that she can’t have a baby of her own.

After deciding to adopt, Rose steps up in the role of auntie to sister Nina’s baby, and realises you don’t have to be a mother to parent.

Fiona, too, cried as the series came to an end.

She said: “We were all really sad but elated too, and there was a big party and that was great, and we celebrated it but there were tears!”

Fiona has also appeared in Grantchester, The Bill and Flack, but The Split is most probably her stand-out TV role so far.

Actress Lara joins the cast of The Split for the third and final series.

She plays Kate, a love interest for Nathan.

Lara said: “Kate arrives and has just started dating Nathan, and of course she wants to meet Hannah, the mother of Nathan’s children who he’s spent 20 years with.

“She’s totally okay with having intense, deep discussions and she’s done her own homework so she doesn’t have the baggage that Hannah has.”

Lara also admitted that one scene left her “nervous” and in need of her “big-girl pants”.

She said: “I was a little bit nervous about a certain scene because I wasn’t sure if it was treading on people’s toes too much.

“I think it was Nicola who said to me: ‘If these words were coming out of a man’s mouth, we wouldn’t think twice.’

“So I had a talk to myself, put my big-girl pants on, and needed to be okay with being this honest and direct, and ballsy. So that’s what I did.”

Zander is the boss of the recently-merged Noble Hale Defoe.

Aside from The Split, you’ll have also seen him in Doctor Who, Designated Survivor and Netflix series When They See Us.

The end of series two saw Tyler kiss Nina – on the day of his wedding to Zander.

And new trailer suggests there will be even more trouble ahead in the upcoming series, for more than one marriage.

You’ll have seen Damien in Brassic, Being Human, Game Face and Ripper Street.

The Split starts on BBC One tonight (April 4) at 9pm.