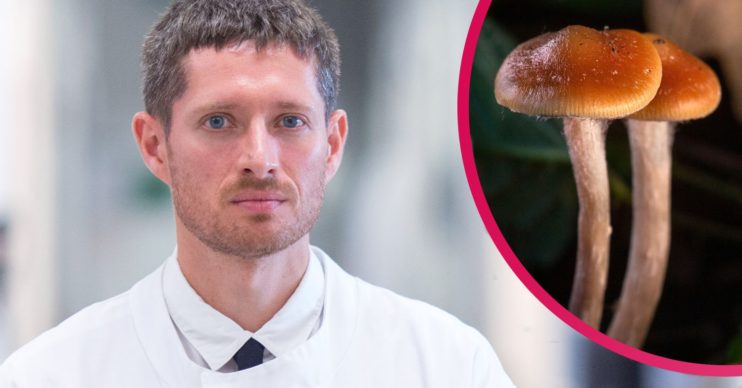 The Psychedelic Drug Trial on BBC Two: What is psilocybin and can it help depression?

The Psychedelic Drug Trial on BBC Two looks at psilocybin and whether it could help tackle depression – but what is it?

Shot over 16 months, the film meets patients taking part in the trial and looks at the results.

Can mind-altering drugs measure up against anti-depressants?

Psilocybin is the active ingredient in magic mushrooms.

The mushrooms grow in Europe, South America, Mexico, and the US.

The body quickly converts psilocybin into psilocin, which has mind-altering effects similar to those of LSD.

These include extreme happiness and colourful images.

Of course, it can also include unpleasant reactions such as sickness and panic attacks.

Can psilocybin help with depression?

Dr Ekaterina Malievskaia believes that the chemical can help tackle depression – if it’s combined with counselling.

She says: “Psilocybin works on a system of connections in what is known as the brain’s default mode network.

“It’s where your ego, your sense of self, lives.”

When patients become used to it, they can “gain a different perspective”.

She adds: “It can help them generate solutions for themselves.”

Doctors have researched its use on anxiety disorders, depression and addictions for more than 20 years.

The short-term trial found that psilocybin therapy can be as effective as commonly-prescribed anti-depressants.

Experts caution that this is a small trial, however, with more research needed.

The 2005 Drugs Act states that both fresh and prepared magic mushrooms are Class A drugs.

This means that it’s illegal to have this type of magic mushroom for yourself, to give away or to sell.

However, some leading doctors say that magic mushrooms should be made legal in the same way as cannabis so they can be used to treat depression.

Someone caught with magic mushrooms could face seven years in prison and a fine for possession.

First of all, this one-off documentary chronicles a ground-breaking new trial at Imperial College London.

The trial sees the psychedelic drug psilocybin tested against an antidepressant.

Could a psychedelic drug be as effective for depression?

Filmed over 16 months, the programme follows a team of scientists and psychotherapists.

They compare the effects of the active ingredient of magic mushrooms with an antidepressant on a small group of participants with clinical depression.

Viewers follow Professor David Nutt and Dr Robin Carhart-Harris over 16 months, as they trial the chemical on clinically depressed patients.

Finally, David and Robin aim to show that psychedelic drugs aren’t as harmful as people think.

The Psychedelic Drug Trial airs on Wednesday May 19 2021 at 9pm on BBC Two.

Would you be willing to try psilocybin for depression? Leave us a comment on our Facebook page @EntertainmentDailyFix.