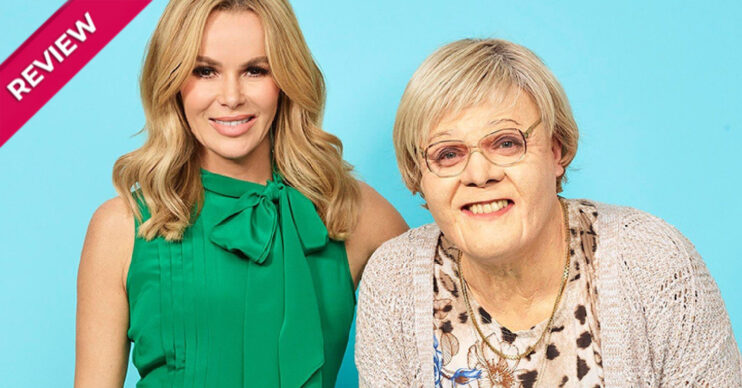 The Holden Girls REVIEW: Amanda’s a hoot, but Leigh Francis lets the series down

On paper the idea behind E4’s new mockumentary comedy The Holden Girls: Mandy and Myrtle is a cracker.

Amanda Holden’s outrageous northern gran comes to live with her in London and causes havoc – but one thing ultimately lets it down.

You see, if the show had teamed Amanda up with a real old broad trying to fool gullible folks into thinking they were actually related, the show would have been genuinely funny.

But because Leigh Francis has once again piled on the prosthetics, it’s hard to believe the potential comedy set-ups because he is so obviously not a real woman.

Read more: Who is Amanda Holden’s nan Myrtle in The Holden Girls? Identity revealed but some viewers are still confused!

And that means all the shocked reactions we get from the likes of Ben Shephard, Catherine Tyldesley and Howard Donald are fake.

Now, if producers had cast a real old gal in the role of Myrtle and shot the series like Borat or one of Ant & Dec’s hidden camera set-ups, the reactions of the celebs would have been far more genuine and a helluva lot funnier.

For instance, in the scene in which a randy Myrtle is seen crawling all over her telly pin-up Ben, we know as a viewer that the interaction is scripted because it is so clear that Myrtle is nothing more than a rubber-layered fraud.

Imagine, though, if a clueless Master Shephard had actually been confronted by a real-life OAP with a lascivious look in her eyes, then his reactions would have been a lot funnier.

Same with the scene when Amanda meets her agent. The comedy would have felt less forced had the agent trying to conduct a serious meeting not already been in on the gag.

And how funny would it have been if Howard Donald actually believed that this foul old handbag had mistaken him for Jason Orange or a member of Boyzone.

It would have been utter genius!

But to give the show its due, there were one or two genuinely funny moments that prove that Amanda Holden really is game for a laugh.

To let Myrtle joke about her ex Les Dennis and poke fun at her current hubby Chris was brilliant.

It shows the BGT judge and chart-topping singer to be someone who can laugh at herself, while providing viewers with rare moments of wicked comedy.

Sadly that’s not enough for this reviewer or indeed many of the folks at home who watched the first episode and expressed their unhappiness.

The first three episodes are available on 4oD and, while they offer moments of hilarity, the series as a whole feels rather like a tediously overlong sketch!