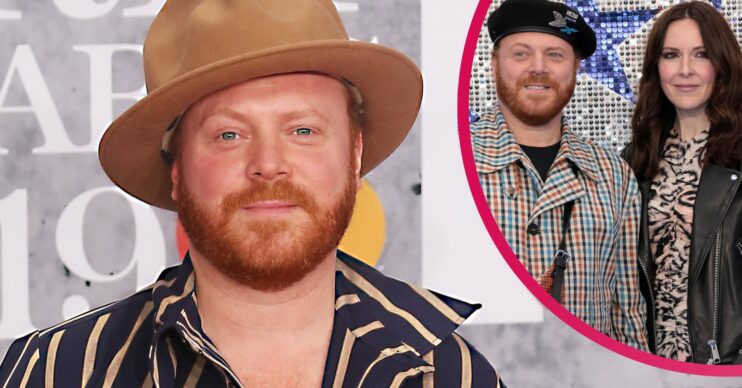 The Holden Girls on E4: How old is Leigh Francis, who is his wife and how did he become famous?

Leigh Francis is best known for playing outrageous comedy character Keith Lemon in Celebrity Juice – but who is the man behind the mask and how old is he?

Does Leigh have a wife and children?

Here’s everything you need to know about the comedian who came to fame on the now-controversial TV show Bo’ Selecta!

How did Leigh Francis become famous?

Leigh Francis is an English comedian and actor, who also writes, directs and produces for TV.

Before making his TV breakthrough, he was discovered and encouraged by presenter Davina McCall.

She saw him performing in role stand-up comedy in a comedy club and backed him for success.

He went on to create Channel 4’s Bo’ Selecta!

The comedy series, which aired from 2002 until 2009, saw Leigh take on a number of celebrity spoofs including Craig David, Michael Jackson and Mel C.

He went on to portray Keith Lemon in several ITV shows including Celebrity Juice from 2008, Lemon La Vida Loca, Through the Keyhole and The Keith Lemon Sketch Show.

On June 4 2020, Leigh Francis made a very public apology for his characterisations on Bo’ Selecta!

Appearing as himself, a rarity in itself, Leigh apologised via Instagram for his portrayal of various black celebrities on Bo’ Selecta!

In light of the Black Lives Matter movement, Leigh said: “Following recent events, I’ve done a lot of talking and learning and I would like to put this out there.

“I want to apologise to anyone who was offended by Bo’ Selecta!

“I’m on a constant journey of knowledge and just wanted to say I’m deeply sorry.”

He went on to say: “Back in 2002, I did a show called Bo’ Selecta! and I portrayed many black people.

“Back then I didn’t think anything about it.

“[…] I’ve been talking to some people and I didn’t realise how offensive it was back then and I just want to apologise.

“I want to say sorry for any upset I caused whether I was Michael Jackson, Craig David or Trisha Goddard… All people who I am a big fan of.”

The show was subsequently axed from All 4.

Or at least, that’s what everyone suspects anyway!

Although E4 has not officially confirmed it’s Leigh Francis behind the prosthetics, listings are naming him as playing the character.

The E4 sitcom is eight episodes long and airs on Tuesdays at 10pm from September 7 2021.

A “documentary-style” series follows Amanda Holden, her family and her fictional nan, Myrtle.

Viewers will see a concerned Amanda persuade her lonely nan to relocate from Doncaster to live with her in her swanky London house.

Following a chaotic settling-in period, it isn’t long before tempers fray and Amanda is forced to choose between her husband and her awkward elder relative.

Who is Leigh Francis’ wife?

They wed on October 30 2002 at Allerton Castle in North Yorkshire.

The pair met when Leigh was a teenager.

Do he and his wife have kids?

In February 2009, Leigh and Jill welcomed their first daughter, Matilda.

They have since had a second daughter called Dolly.

However, Leigh remains very private about his personal life.

She said: “In real life, he’s quiet and reserved and obsessed with creating characters.

Fearne also said that Keith is the “opposite of his character”.

What’s his net worth?

According to Wealthy Gorilla, Leigh is worth more than £7million.

His biggest career move came after he starred in his own show, Bo’ Selecta!

How old is Leigh Francis?

Leigh Izaak Francis was born on April 30 1973 in Beeston, Leeds.

He is currently 48 years old.

Leigh Francis stars as Myrtle in The Holden Girls, which starts on E4 with a double bill on Tuesday September 7 2021 at 1opm.

Are you a fan of Leigh Francis? Will you be tuning in to The Holden Girls on E4? Leave us a comment on our Facebook page @EntertainmentDailyFix.