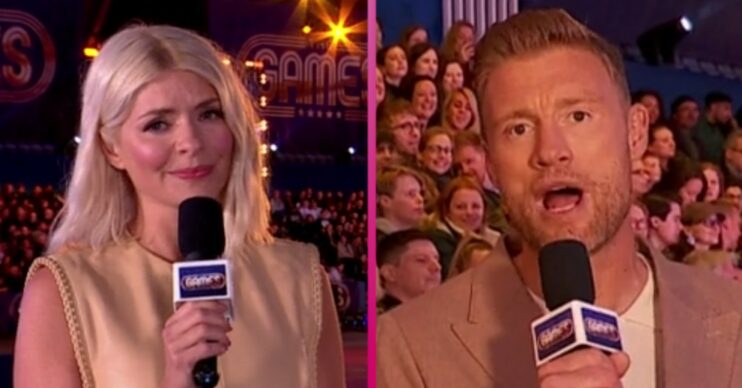 The Games: Holly Willoughby red-faced as she shuts down Freddie Flintoff’s crude joke

Given a ticking off and told: 'Enough of that'

The Games host Holly Willoughby gave ITV co-presenter Freddie Flintoff a ticking off after a crude reference on the show last night (Wednesday May 12).

TV presenter Holly shut down her co-presenter as former cricketer Freddie made a cheeky joke ahead of a javelin challenge.

But despite seeming irked by Freddie’s words, Holly soon reined him in and got the athletics programme back on track.

The bawdy moment came as the two hosts discussed the forthcoming event with YouTuber and show pundit Yung Filly.

Freddie seemed interested in how to handle the sporting spear. And so he enquired about proper procedure.

He pondered: “Is there a correct way to hold the shaft?”

Yung gave a double-take to the camera as chuckles were heard elsewhere in the studio.

But Holly was having none of it, grumbling the comment was “too adult”.

She intervened: “Quite enough of that. This event feels slightly less PG now.”

Quite enough of that.

A bemused Freddie acted innocent. But Holly swiftly moved the show on, delivering her next link introducing footage of the women’s javelin event.

However, The Games viewers dismissed the athletic prowess and administration on display.

‘What a load of rubbish’

One viewer took issue with how the event was judged.

They wrote: “Just flicked on to The Games. It’s the women’s javelin.

“I have never seen such a load of [blank] in my life.

“What’s the point of it if you’re not going to judge it properly?”

Read more: The Games: Holly Willoughby SOAKED as she jumps in the pool fully clothed

Someone else agreed: “Worst chucking ever.”

And a third person chipped in: “I was laughing at it, what a load of rubbish.”

The Games continues on ITV tonight, Thursday May 12, at 9pm.