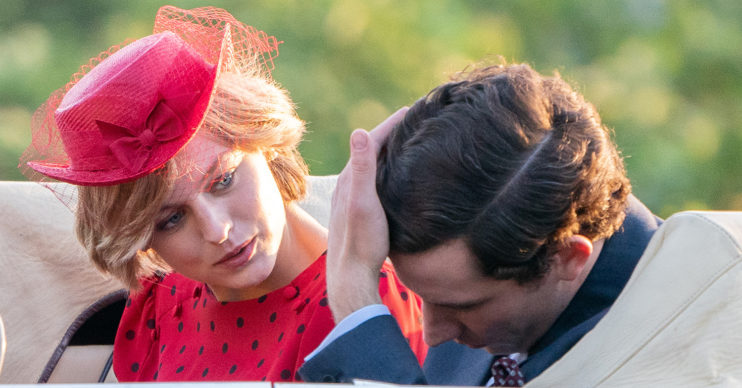 A new trailer for Netflix’ The Crown series four has dropped.

And it includes a very dark side to Princess Diana and Prince Charles‘ relationship.

An explosive row features, indicating that their relationship was far from smooth sailing from the get go.

A sinister narrator describes their marriage as a ‘fairytale’.

But then adds that ‘usually they end with happily ever after’.

What happens in the trailer of The Crown series four?

Diana, played by Emma Corrin, and Charles, Josh O’Connor, are shown ecstatic on their wedding day as they dance in front of their reception guests.

Then a sour faced looking Queen, played by Olivia Coleman, appears on horseback.

Glimpses of Diana and Charles on their first royal tour are then shown.

Followed by the pair in a heated row, apparently screaming at one another.

The tantalising trailer ends with Princess Diana on her wedding day, with her trawling veil placed over her face.

Who is starring in the new series of The Crown?

Airing on Netflix on the 15th November, it is likely to be the show’s most polarising series yet.

Netflix describes the series as: “As the 1970s are drawing to a close, Queen Elizabeth (Olivia Colman) and her family find themselves preoccupied with safeguarding the line of succession by securing an appropriate bride for Prince Charles (Josh O’Connor), who is still unmarried at 30.

“While Charles’ romance with a young Lady Diana Spencer (Emma Corrin) provides a much-needed fairytale to unite the British people, as the transformation from teenager to Princess of Wales takes place, it is anything but a fairy tale for Diana.”

One user tweeted: “Actual shivers after watching that. THAT is how you do a trailer.”

While another penned: “As always it looks really good! I would imagine there will be many iconic outfits Diana wore in the 80’s. The attention to detail in this series is absolutely flawless!”

A third user tweeted: “CANNOT wait for this season!! Will be the best yet!!”