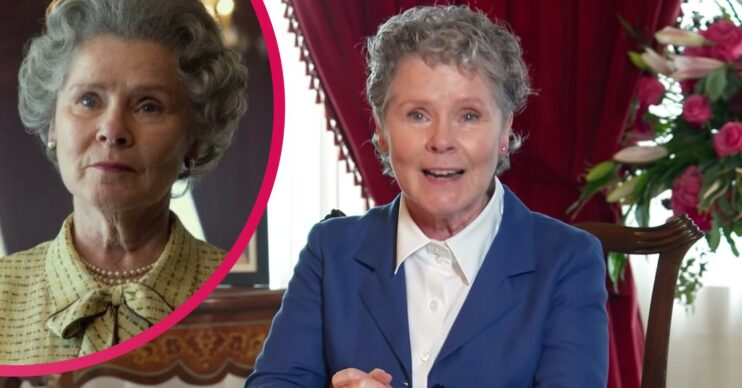 The actress also gave a release update for the new season

Imelda Staunton gave her first official address to fans of The Crown ahead of season five this weekend.

The 65-year-old actress is taking over the role of Queen Elizabeth II in the upcoming episodes, with a time jump allowing for a cast swap.

Imelda appeared from behind her royal desk to give an ‘address’ to the fans at Netflix’s TUDUM event on Saturday.

Smiling to the cameras out of character, Imelda paid tribute to the actresses who played the Queen before her, as well as discussing how she felt about taking on the role.

“Hello, I’m Imelda Staunton, and I’m currently on the set of The Crown, where we have just begun filming season five,” she said.

“I’m delighted to be here, inheriting the role of Queen Elizabeth from two outstanding actresses. Most recently, the wonderful Olivia Colman, and who could forget the actress who originated the part, Claire Foy.”

“I will do my utmost to maintain the very high standard that they set. Hopefully, I look calm, collected and capable. My stomach, meanwhile, is doing somersaults,” she added.

“On behalf of the cast and crew, we look forward to bringing you the next season of The Crown, in November, 2022.”

The short and sweet address was part of a massive Netflix event, where the streaming service dropped numerous first looks, announcements and exclusives to fans.

While this is all we got of The Crown, we’re now even more excited.

Who joins Imelda Staunton in the new cast of The Crown?

Currently, joining Imelda in the new cast of The Crown is…

When will The Crown season 5 be released?

While we don’t have a specific date, the series will return in November 2022.

The show is currently being filmed, so it’s unlikely to return any earlier.

However, Netflix previously surprised fans with early arrivals as a result of finishing early or openings in their schedule.

Read More: Martin Bashir’s interview with Princess Diana to be covered on The Crown

The Crown seasons 1-4 are available on Netflix now.