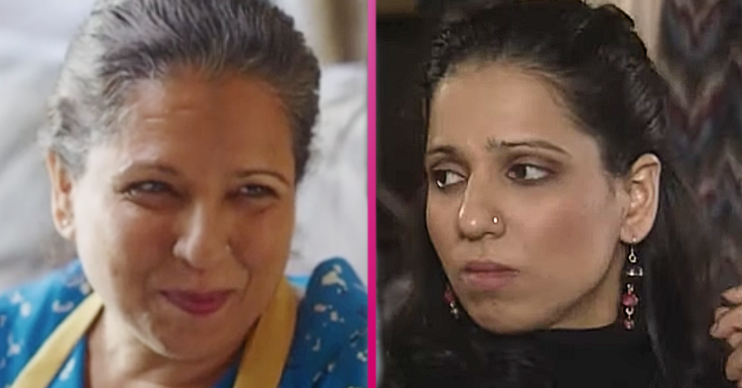 The Cleaner on BBC One: Who did Shobu Kapoor play in EastEnders and why did she leave?

It's so good to see Shoba onscreen again!

Eagle-eyed viewers of The Cleaner on BBC One will have recognised a very familiar face.

Yes, Greg Davies is the star of the show but viewers will have noticed that Shobu Kapoor pops up in episode one.

The former EastEnders star was once a household name. But when and why did she leave Albert Square?

Who does Shobu Kapoor in The Cleaner on BBC One?

Shobu plays nosey neighbour Neeta in episode one, and gets a bit of a surprise when she interrupts Wicky as he begins to clean up the crime scene.

She brings him in a pie that she baked, but scares the life out of him when she walks in.

It’s safe to say that the pie goes the same way as the deceased in the kerfuffle.

Now it’s not just blood that Wicky now has to clean up.

And the situation gets worse when Neeta suggests he apologises in a very unique way.

Where have you seen star of The Cleaner on BBC One Shobu before?

Shobu became a household name in the mid-1990s when she appeared in EastEnders, playing fan favourite Gita Kapoor.

Married to philandering Sanjay (Deepak Verma), she would star in the soap for six years.

Some of Gita’s storylines were very memorable.

Suffering from post-natal depression she was convinced that Sanjay was having an affair, and eventually found out he was sleeping with her sister!

But that wasn’t the half of it. When Gita and baby daughter Sharmilla go missing, Sanjay is questioned by the police.

However, soon Gita gets in touch with Ruth Fowler saying that she’s living in Birmingham and is in desperate need of money.

When Sanjay finds her, he’s shocked to see she has given birth to another child – this time a boy – after a one-night stand.

Initially furious, he decides to become a loving father to Arjun.

But the story ends badly, when the scandal is leaked to the local newspaper on her return and everyone knows what happened. It’s then they decide to leave the Square for good.

Why did Shobu leave EastEnders?

Shobu, then 35, decided to leave the soap in 1998 in the midst of a mini-crisis for show bosses.

Over the course of two months, five cast members quit the show, including Shobu and Deepak.

At the time, Shabu was pregnant with her second child and she said she wanted to take time off to be with her new baby.

However, subsequent reports suggested that her character was shelved when a new producer – nicknamed The Axeman – came onboard.

What has Shobu done since EastEnders?

Now 60, Shobu has enjoyed a busy career since leaving EastEnders. And now she’s back on our screens in The Cleaner on BBC One.

Read more: How tall is Greg Davies and does the Taskmaster star have a partner?

She starred in hit British/Asian movie, Bend It Like Beckham, and also appeared in Casualty, Doctors, Doctor Who and Chicken Tikka Masala.

In th meantime, enjoy her in The Cleaner on BBC One!