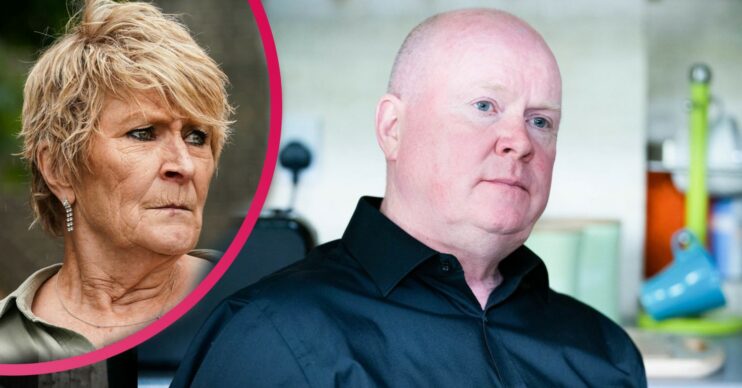 Next week’s EastEnders spoilers show Phil’s life on the line as an inferno rips through the Mitchell house.

Flames flicker around the lifeless Mitchell as the fire takes hold.

Phil‘s unconscious after taking a beating from ex-love Shirley over Tina’s disappearance.

Will this be the final chapter in his story, or will Phil live to fight on?

Janine, Tommy and Scarlett are also trapped in the horror blaze as it begins ripping through 55 Victoria Road.

The fire started after a scuffle in the kitchen where Janine’s cardigan was thrown onto the lit stove.

Read more: Who plays Scarlett in EastEnders? What else has Tabitha Byron been in?

Now four lives are on the line as smoke fills every inch of the family abode.

Passing Ben and Callum are shocked when they see flames and run over to get a closer look.

Meanwhile, Janine and the kids are desperately looking for an escape as Phil remains unconscious.

It looked as though Phil was a goner even before the fire started.

After being beaten by livid Shirley with a baseball bat, Phil is already seriously hurt.

She scarpered in a panic, leaving Phil on the floor and out for the count.

Read more: Who is Phil Mitchell in EastEnders, who were his four wives, and is he a killer?

EastEnders spoilers show the flames moving dangerously close to a gas canister as the fire spreads.

Onlookers are horrified as a massive explosion suddenly rips through the building, and they realise anyone trapped inside can’t possibly survive the nightmare blast.

Does this mean curtains for Phil, or has fate dealt him another hand?