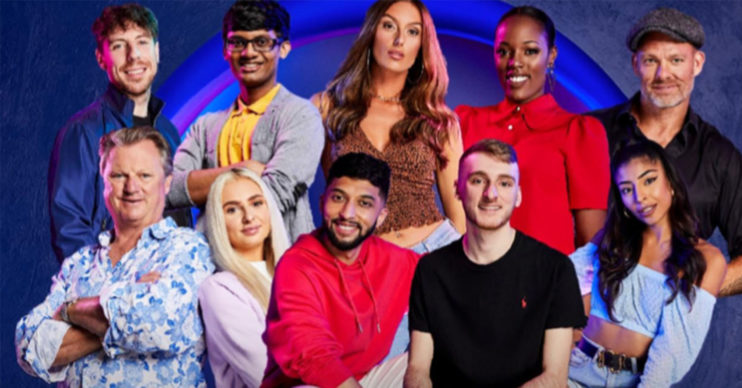 The Circle Series 3 cast: Hunter from Gladiators is among them!

The hilarious reality show is returning for its third series and will be once again hosted by Emma Willis.

So who are in the cast this time around? And when is it on?

And how does The Circle work again?

Get the answers to your burning questions and more below….

The cast this year features a father and daughter duo, a high flying company director and multiple contestants that are choosing to pose as ‘catfishes’.

Andy, 34 from Solihull, is a dad who had life-changing surgery at 18 that removed his large bowel.

But this hasn’t affected his confidence, as he’s gone from strength to strength in his career.

He now works as a company director and plans on playing himself on The Circle.

He says: “My motivation is to show that you can win it with a bit of integrity.

“I really want to get a catfish to admit to me that they’re a catfish. I don’t know what I would do with that information, but that is my ultimate aim. I’d class that as winning.”

Billy, 19 from Essex, is a sports marketing manager who will also be playing himself.

The teen says he’s a TikTok addict who can spend up to eight hours a day on the social media platform.

And he plans on playing himself because he’s worried he’d slip up with his catfish cover story.

Billy explains: “I did think about going in as someone else but then I decided I would also slip up, I’d forget something so I think by going in as myself I’ll know what to do and what not to do.”

Hashu, 28 from Birmingham, is a YouTuber and content creator.

He says he’s a lifelong pranker, and sees The Circle as the ultimate way to flex his pranking skills.

And he reckons he’ll have a greater chance of winning as his uncle than as himself – as he says Syed is sweet and not very good at social media.

Hashu explains: “He’s a sweet old man who just doesn’t have the best English grammar, so everyone helps him and guides him a little bit.

“Then he’ll catch everyone with their guard down. I’m going to be making people laugh all the time without even meaning to.”

James, 47 from London, is a strength and conditioning coach.

And he is choosing to play an NHS Nurse called Gemma.

He’s also former Gladiators star Hunter and says if he wins he’ll use half the money to show his appreciation for the NHS.

But he ultimately chose to create Gemma as he thinks this will make him the most popular contestant.

James says: “Originally when I thought about someone who’d be the most popular person, I was doing a clap for the NHS every Thursday.

“I want to do my best to pull it off and get some money for the NHS. I’ve done a fair bit of research, talking to various nurses.”

Manrika, 24 from Birmingham, is a content creator and recruitment consultant.

She would love to win the money to help her family out and is excited to showcase her bubbly personality on telly.

She’s decided to play herself as she thinks she already has a winning persona.

She explains: “I think I’ve got the best advantage playing myself because I’m a genuine down to earth person, I’m a bubbly character, I can get on with everybody.

“Going in as someone else, I’d forget half the stuff I’ve said so it would backfire, and then I’d be blocked straight away.”

This father and daughter have chosen to go into The Circle as Penny, a 49-year-old letting agent from London.

Jamie and Millie say they’ve chosen to play Penny as they think her likeability will win the other contestants over.

And she is modelled on Millie’s ideal of a perfect stepmum.

Jamie says: “Our strategy is that Penny will be very difficult not to like, and also funny.

“I think we’re just going to take it slowly getting to know people. We want to be in it for the long haul and I think we’d be a bit naive if we came up with a clear strategy other than to ingratiate Penny with the other players to start with and go from there.”

Whereas Millie explains: “So it has been fun to create this perfect woman – someone who has the qualities that Dad might want in a partner and I would want in a stepmum. She’s kind of like a bit of both of us.”

Tally, 23 from Worthing, is a receptionist at a doctor’s surgery.

She says she hopes to show the real her on The Circle by playing herself.

As opposed to the highly filtered version she portrays on Instagram.

Tally says: “Although I enforce it on my Instagram at the moment, I don’t think that you should have to look a certain way.

“I understand that it’s easy to fall into that Instagram trap. I want to prove that no matter what stage you’re at with it, you can still redeem yourself.”

Vithun, 23 from London, is an accountant who will be playing himself.

He says he hopes to use facts and statistics to win the show rather than feelings or intuition.

And he hopes to make history by winning series three of The Circle.

Vithun explains: “I have always been a fan of reality TV. I live for drama, chaos and anarchy!

“There has never been an Asian winner of a civilian reality TV show in the UK, I want to try and make history.”

Yolanda, 30 from London is a dating agency founder.

And she will be playing her husband Chris!

Yolanda says she will be playing a single and ready to mingle version of her hubby.

And she knows him so well, she says she has no fears of slipping up.

As for going in as a catfish, she’s not bothered about any potential criticism.

Yolanda claims: “At the end of the day it’s a game. If anyone gets upset, I’ll say ‘bring it in’, give them a hug and tell them: ‘Don’t be so bitter! It’s alright, it’s not the end of the world.”

How does The Circle work?

The Circle is a very unique reality show indeed.

It is based around the popularity of social media and the ability to ultimately be anyone you want online.

Contestants live in the same building, but are not allowed to see one another.

Instead they can only communicate through the online profile they have each created.

They can message and speak to one another via the app – but never video chat.

The contestants then rate one another and also have the ability to block one another.

Whoever accrues the most likes over the course of the series wins.

When is The Circle Series 3 on?

You will be able to catch up on previous episodes on All4 once they’ve aired.