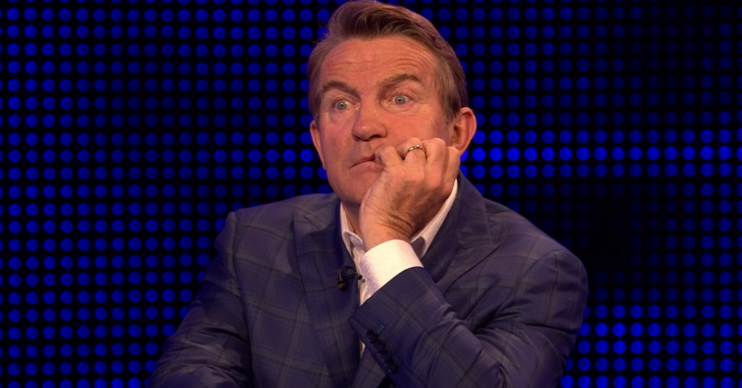 They flopped spectacularly up against The Governess

Fans of The Chase were very unimpressed with Friday’s team of contestants after every single one of the four players ended up being squashed by The Governess.

Players Steve, Vicki, Sam and Lita were slammed as the ‘worst ever’ team to appear on the ITV hit game show – even if they did go all out in an attempt to win big.

Sales manager Steve, 49, started strongly with a great Cash Builder round that saw him accrue £7,000 for his one-one-one.

However, the game seemed to go wrong for him and his fellow teammates from the moment he said he wanted to play against The Vixen and got The Governess instead.

Not that she underestimated Steve’s challenge, praising him for a “very good” Cash Builder.

Sadly, even though The Governess faltered herself over questions relating to cheese and Coronation Street, victory was not to be for Steve – and that was about as good as it got for his team.

Vicki, a biomedical scientist whose mum has previously appeared on The Chase, was up next and clearly determined to make an impression, plumping for The Governess’ highest offer of forty grand.

“It’s very unusual to go high when seat one has gone out,” The Governess mused, but in time this team proved they could be even more unusual.

And even though Vicki seemed confident with her answers, she unfortunately slumped to a disastrous loss by getting her first two questions against The Governess wrong, including one about a pioneer in vaccination.

Host Bradley Walsh said how much he admired Vicki for going all out and The Governess also hailed her as “very brave”. But bravery didn’t provide Vicki with the correct answers she required.

Sam, a software developer from Leeds, was up next and said he wanted to buy his pals a fish and chip supper with his winnings.

However, The Governess’ retort – “all that’s getting battered today is you” – turned out to be the reality of the quizzing situation.

His challenge ended with him still five away from home – and a saucy gag being aimed at this mother.

Asked a question relating to Oscar Wilde character Dorian Gray, Sam plumped for another option and gleefully announced his mum is a fan of Christian Grey, even though he wasn’t aware who Grey is or was.

The Governess quipped back at him: “I don’t know what your mum is into but Christian Grey is from 50 Shades of Grey.”

“Oh dear,” Sam spluttered after he realised his gaffe.

Final contestant Lita, 72, was a gutsy as Vicki and Sam before her – and just as unsuccessful.

She was offered a whopping £80,000 by The Governess following her Cash Builder and Bradley noted how there had never been so many contestants to accept a high offer before on the show.

“Three on the bounce!” he exclaimed.

Despite Lita knowing that putting grapes in a microwave causes them to catch fire, her appreciation of the meaning of ‘languor’ and Danish politics let her down and her challenge was also snuffed out in rapid order.

With no contestants through to the final, Steve was nominated to battle The Governess.

His knowledge about noble gases, Harley Davidsons, Roald Dahl and Cuban cities saw him score 10, but unsurprisingly, it wasn’t enough to defeat his Chaser opponent.

What was a surprise was that The Governess slipped up four times. Steve, however, was unable to push her back at all, meaning he was caught with 54 seconds to go.

“Brave but foolhardy,” was how The Governess summed up the team’s attempt to take her on.

By comparison to what viewers were saying on social media, that was very much a compliment.

“Did the real contestants not turn up and they found this lot outside the studio? #TheChase,” one user wondered.

“This has been the worst episode I have ever seen. I will never ever get this hour back #TheChase,” another person tweeted.

Someone else stated: “Worst ever #Thechase.”

And another claimed: “Seriously my cat could do better #TheChase.”

“I’d go as far as saying thats the worst team ive ever seen on #TheChase,” claimed yet another Twitter user.

And another person added: “This episode has been so dire I’d rather put grapes in the microwave and stand in the front garden watching the house burn down. #TheChase.”

– The Chase airs on ITV on weekdays at 5pm