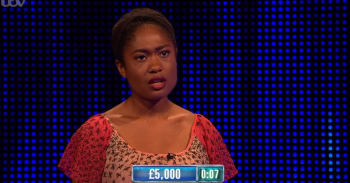 The contestant was telling her teammates to take the high offers

The Chase viewers were left furious last night after a contestant took the low offer despite telling her teammates to go for the middle or high offer.

Philippa, a theatre student from Leeds, managed to bag £6,000 during her cash builder round.

Host Bradley Walsh told Philippa: “Fair advice from Dave but I think you’re a much better player than the one.”

Fans were left fuming as she opted for the low offer after telling her fellow quizzers to stick with the money they earned in the cash builder or go high.

Taking to Twitter to vent their frustration, one person wrote: “What a snake. Tells player 3 to take the high offer. Then goes for the low offer. #TheChase.”

Another said: “That’s justice for Philipa being a snake and taking the low offer #TheChase,” while a third added: “Oh Phillipa. Got £6K then took the low offer!!! #TheChase Shame on you grrrrrr. (sic)”

What a snake. Tells player 3 to take the high offer. Then goes for the low offer. #TheChase

Oh Phillipa. Got £6K then took the low offer!!! #TheChase Shame on you grrrrrr

A fourth tweeeted: “Nothing more ratty than taking the low offer on #TheChase. Shameful.”

Nothing more ratty than taking the low offer on #TheChase. Shameful

The pair scored 15 between them but it wasn’t enough and Anne beat them with time to spare – leaving Dave and Philippa going home with nothing.

Philippa and Dave worked hard but, in the end, @anne_hegerty prevailed. 🔥

See you all tomorrow for another BRAND NEW episode of #TheChase on @ITV and @WeAreSTV. pic.twitter.com/ogX32c48WR

Read more: The Chase gets musical with contestants’ names

Some viewers took to Twitter after the final chase and claimed Dave “deserved better”.