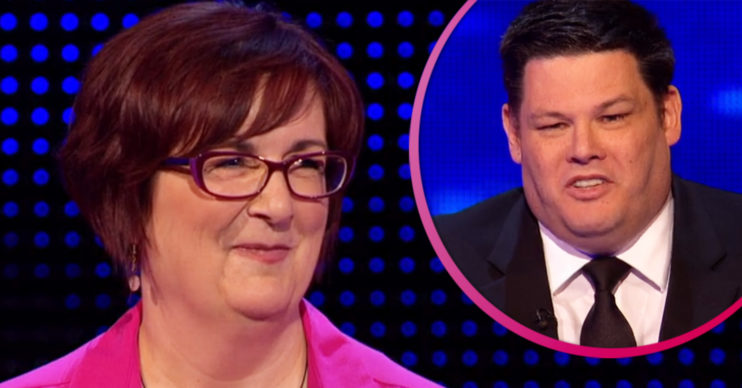 The Chase: The Beast destroyed by contestant as she’s branded ‘best player ever’

The Chase viewers praised a contestant after her incredible solo performance against The Beast last night.

On Wednesday evening’s show, which was a repeat, Mo, Ali, Rebecca and Gary took on Chaser Mark Labbett – aka The Beast.

However, it was only Ali who made it back to the Final Chase after bagging £5,000.

Ali then went on to get an incredible 19 steps ahead of the Chaser.

Bradley Walsh told her: “Ali, great! I’ve got say when you said 16 [steps] before the break, I was like, ‘not really, not on your own.’

Did The Beast catch her?

The Beast then returned as he tried to catch up with Ali’s 19 steps.

However, she bagged four pushbacks and The Beast eventually ran out of time.

The Chaser said, “Give her a hug from me,” as Bradley walked over to Ali to give her a hug.

The Beast replied: “Put me under pressure, but you put me under the pressure so well played.”

Viewers were stunned on Twitter, with many calling Ali one of the “best players ever”.

Another wrote: “Get in there Ali, possibly the best Chase I’ve ever seen, 19 on her own, incredible.”

One added: “One of the best players I’ve ever seen in the #finalchase unbelievable!”

Read more: The Chase: Twitter users poke fun at contestant Olivia as they ask if she ‘walked on by accident’

Others called the Final Chase also one of the best ever.

One tweeted: “That is the best Final Chase I have ever watched, wow.”

Another said: “This has to be one of the best Final Chases of all time.”