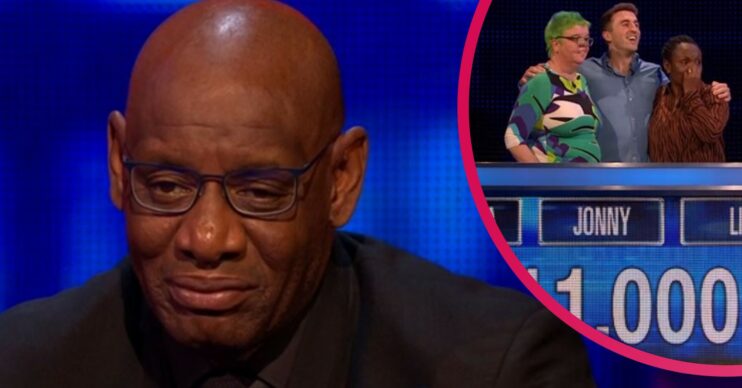 The Chase: Shaun Wallace divides viewers as team beat him in £11k win

Many people defended Shaun against criticism

The Chase star Shaun Wallace has divided viewers after being defeated by the team last night.

During Wednesday’s show, the quiz master – aka The Dark Destroyer – only managed to beat one contestant during the cash builder rounds.

This meant he faced three team members during the final Chase, and Corinna, Jonny and Liz managed to beat the Chaser.

Shaun Wallace on The Chase

The team had bagged £11,000 for their prize fund and managed to rack up 15 steps ahead of the Chaser.

Shaun took on the challenge, but didn’t reach the 15 steps.

After bagging 12, The Dark Destroyer ran out of time meaning the team had won.

Shaun told the team: “You thoroughly deserved it. With those pushbacks, that made the difference in the end.”

However, viewers weren’t impressed with Shaun’s performance and some even called for him to no longer be a Chaser.

Someone will always be weaker doesn’t mean he should exit just yet.

Another wrote: “Shaun loses more than the rest of the chasers.”

A third added, “Time for Shaun to go. #TheChase,” while another said, “Dreadful performance Shaun”.

One tweeted: “Erm… do viewers watch The Chase to see the players win or the Chasers? People calling for Shaun to leave is just wrong IMO because he had a bad day at the office.

“The chasers are not infallible.”

Another added: “I love Shaun, he’s my favourite chaser.”

One said: “Someone will always be weaker doesn’t mean he should exit just yet.”